Click here to be the first to review Serengeti Nat'l Park 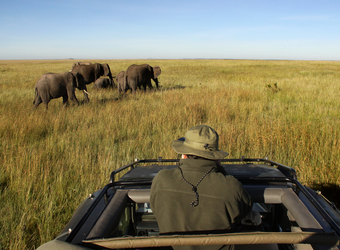 The Serengeti is best experienced through exciting morning and afternoon wildlife drives in open or closed 4x4 vehicles, scouring the savanna for cheetah perched on termite mounds, lion hunting wildebeest, leopard lazing in trees, and much more. In the few private reserves surrounding the park, night wildlife drives, guided nature walks, off-road driving, meals on the savanna and fly-camping away from the main camp are available. Certain areas of the northern Serengeti offer walking safaris as well. Loliondo, a private conservancy on the northeastern edge of the park, offers an authentic and enriching cultural experience with the local Maasai, as this is their land, bordering the edge of the Great Rift Valley and the Loita Hills of Kenya. Hike through Loliondo’s rolling hills, ranges and kopjes, and witness everyday Maasai life. 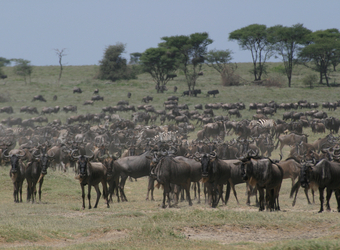 The Serengeti supports the last great overland migration of nearly two million wildebeest, zebra and Thomson’s gazelle. They circle this 5,700-square mile expanse following the rains and grasses. But the Serengeti is more than the migration – its biodiversity has gained it UNESCO World Heritage Site status, and it is home to Africa’s iconic “Big Five”: lion, leopard, elephant, buffalo and black rhino. Cheetah are commonly found atop termite mounds, a vantage point used for spotting prey and other predators that may threaten these fast cats. Famed for sprawling herds of plains game, the area boasts Thomson’s and Grant’s gazelle, impala, topi, eland, waterbuck and Maasai giraffe in addition to the hordes of wildebeest and Burchell’s zebra. Endangered wild dog are also observed, along with hyena and baboon. The Serengeti’s 500 bird species include ostrich, elegant grey-crowned crane, large kori bustard, secretary bird, marabou stork, martial eagle and a variety of vultures. 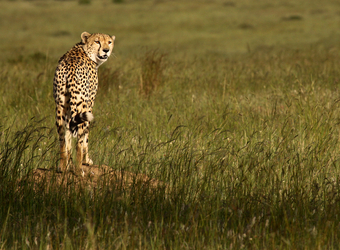 How to Include the Serengeti in Your Safari Itinerary

The Serengeti is a quintessential component of a Tanzania safari. It can be done with the northern circuit of parks and reserves, starting in Arusha for one or two nights to get acclimated; Tarangire for its elephants, baobab trees and the option of walking; Lake Manyara for flocks of flamingos; and Ngorongoro Crater for its dense predator population. For those who wish to get off the beaten path, experiencing Ruaha and Selous before or after the Serengeti will add a dimension of utter wilderness, unparalleled densities of elephant, buffalo and rhino, activities that take you out of the vehicle, such as boating and walking safaris, and a broader range of species in a different ecosystem. While Kenya’s Maasai Mara is essentially part of the Serengeti ecosystem, visiting the Lewa and Laikipia areas of Kenya opens the door to completely unique species, such as Grevy’s zebra, reticulated giraffe, gerenuk and more.