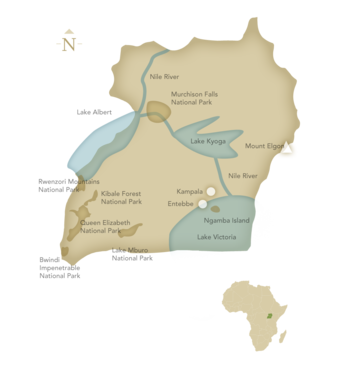 Situated in the heart of Africa astride the equator, Uganda offers mesmerizing natural beauty and superb wildlife viewing. One of the last refuges of the mountain gorilla, Uganda’s rainforests also shelter chimpanzees and monkeys—the world’s best destination for primate tracking. Birding is also spectacular. To the east lies open savanna, where plains animals and predators roam in abundance. Uganda’s rivers—including the White Nile, birthed in Lake Victoria—teem with hippo and crocodile. To experience the diverse riches of Uganda is to concur with Sir Winston Churchill that it is “end to end one beautiful garden.”

Read About the Different Regions and Parks in Uganda

Trekking through the Bwindi Impenetrable Forest, a true equatorial jungle, is life-altering! In this green realm where lowland savanna converges with dense rainforest, a multitude of species abounds. Monkeys jump from branch to branch, chattering in the canopy above, but the ultimate reward comes as you spot the silverback gorilla and spend quiet time just observing him and his troop. What an incredible experience! 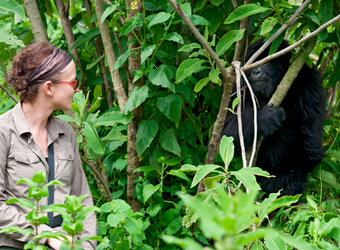 Compact Uganda is a microcosm of African wildlife and environments, offering diverse safari experiences. Gorilla trekking is the high point of any itinerary. To track these wondrous creatures through misty forests and gaze into their equally curious eyes is a wildlife encounter without parallel. Chimps are the highlight at Kibale Forest, which harbors the greatest variety and concentration of primates in Africa, and an amazing assortment of tropical birds. Scenic Queen Elizabeth National Park stretches from the crater-pocked foothills of the Rwenzori Range—the “Mountains of the Moon”—to the remote Ishasha River. Its varied habitats range from gallery and lowland forest to wetlands and savanna, where classic plains game graze. Boat cruises on Kazinga Channel and in Lake Mburo National Park offer front-row views of hippo, crocodile and waterbirds. At Murchison Falls, witness the Victoria Nile plummet 130 feet into Lake Albert. 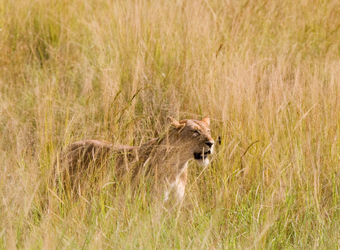 Mountain gorillas are Uganda’s most important attraction. Half the world’s population of this critically endangered species (fewer than 800 remain) reside in Bwindi Impenetrable National Park, where they are threatened by encroachment on habitat, transferable diseases and poaching. Other primates include chimpanzees, blue monkeys, black and white colobus monkeys, vervet monkeys, olive baboons and bushbabies. The savanna and swamps offer encounters with lion, zebra, buffalo, elephant, giraffe, leopard, cheetah, spotted hyena, jackal, waterbuck, bushbuck, topi, oribi, duiker and the rare sitatunga, an aquatic antelope. Uganda’s many lakes and rivers are home to prolific hippo and crocodile. Given its extreme biodiversity, Uganda is paradise for birdwatchers, with more than 1,000 species comprising 67% of Africa’s and 11% of the world’s total population. Some of the more fascinating varieties include crested crane, shoebill stork, African fish eagle, jacana, Narina’s trogon and African pygmy geese. 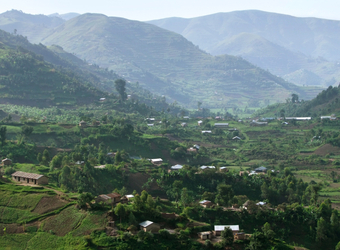 At 91,000 square miles, landlocked Uganda is about the size of Oregon or the United Kingdom. Most of the country lies above 4,000 feet, moderating its equatorial climate. The northeast is arid while the glacier-capped southwest mountains, bordering Congo, receive heavy rain year-round. About 1/3 of Uganda is covered with rivers, lakes and swamps. Uganda obtained independence from Britain in 1962. Since 1986, Uganda has been a largely stable republic with a growing economy. Subsistence agriculture employs 80% of Ugandans, and tourism contributes 8% of GDP. English is the official language. Luganda, Swahili and 30 indigenous languages are also spoken. Uganda’s cultural mosaic includes Bantus that are offshoots of medieval kingdoms and Pygmies descended from ancient hunter-gatherers. The mostly rural population of 32 million is growing at 3.6%, exerting great pressure on Uganda’s natural resources. The capital Kampala and nearby Entebbe are Uganda’s major cities, located in the south on Lake Victoria. 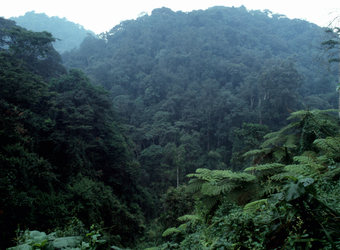 Despite a history of poverty, political turmoil and civil war from the 1960-1980s, Uganda has managed to protect its most biologically important regions. Nearly 15% of Uganda's land is national parks, forests and game reserves. The chain of refuges in the Albertine Rift along the western border harbors half the world’s mountain gorillas, as well as chimpanzees, hippos, elephants, lions and more, in a rich patchwork of habitats. Little wildlife remains outside of parks, however, and Uganda’s dense rural population puts extreme pressure on protected areas. Poaching for bushmeat, illegal logging, charcoal burning and encroachment for farmland all pose major threats. Newer challenges include the discovery of oil and climate change. Yet figures show that buffalo, giraffe, elephant, impala, zebra and waterbuck numbers have risen in the last decade, benefiting from improved monitoring, incentives for local communities to protect wildlife, and expulsion of rebels from the country.

(5.00)
Review Uganda
Month of travel: February
"I was so surprised how diverse the landscape was in Uganda. We explored rainforests with our machete- wielding gorilla trackers, gazed out over the endless ridgelines looking out to the Virungas and negotiated the rich orange-red soils with our trusty safari vehicles. Some of my favorite photos from my trip were taken out the window!"
- K. Hoeger
Month of travel: March
"Uganda is called The Pearl of Africa for good reason--it is lush, beautiful, filled with wildlife and the people are wonderful. I love the authenticity of Uganda--not very touristy and very much still an African country rather than turned into a resort-type vacation. But the places we stayed were classic and wonderfully appointed--downright luixurious! We saw the gorillas of course and since we've been on safari several times before they were our highlight. But the game parks and the entire excperience met the standard of excitement set by thye mountain gorillas. Our advice is to check out Uganda!"
- G. Howe

Safari Itineraries that include Uganda