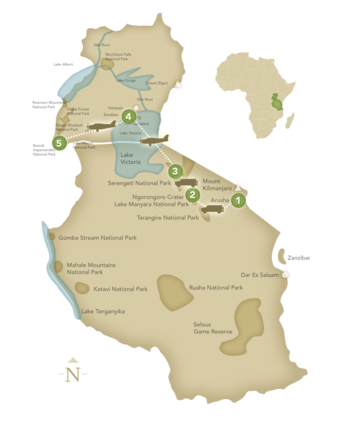 Three of Africa’s most iconic safari destinations are the centerpiece for this exhilarating wildlife adventure. On the Serengeti Plains, vast herds of buffalo, giraffe, wildebeest, zebra and gazelle roam the savanna. Lion, leopard and cheetah stalk them in an ancient dance of predator and prey. Descend into Ngorongoro Crater where you’ll find Africa’s most dense concentration of wildlife, including endangered rhinoceros. Conclude in awe in the rainforests of Bwindi, which shelter nearly half of the world’s remaining mountain gorillas.

Ngorongoro Crater, the world’s largest unbroken volcanic caldera, acts like a natural enclosure for the classic African wildlife that we all hope to see on safari. To follow that up with the Serengeti and then the primates of Uganda, this trifecta offers an exceptionally complete range of the diverse wildlife viewing and scenery that East Africa has to offer.