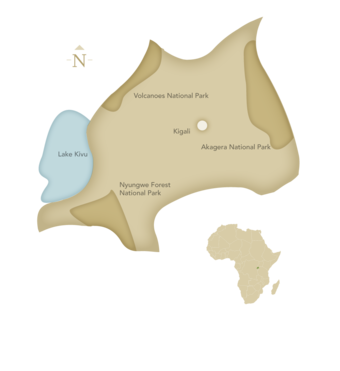 While Rwanda has seen tremendous tragedy, this small country is also a place of immense beauty and continued healing. An important part of its revival is its wildlife ecotourism, centered on the rare and remarkable mountain gorilla that lives in the dense forests of the volcanic Virungas range in the northwest. About a third of the world’s approximately 1,004 remaining mountains gorillas live in Rwanda. Your visit to their natural habitat may be the only hope for their future. A once-in-a-lifetime encounter with the rare mountain gorilla will surely change your life—and it may well save theirs.

Read About the Different Regions and Parks in Rwanda

When you travel in Rwanda, you are indeed a traveler and not a tourist. Few people venture here, and the locals are friendly and welcoming. While sitting in a bamboo forest as a big male silverback gorilla slowly approached our group, I was on the end wearing an orange hair band. Obviously curious about this bright orange accessory, he came over and gently touched my hair, taking a good look. I guess he decided it wouldn’t look good on him, so he ambled off to keep watch over his family. That experience was one of the most moving in my life, and I still think about it daily. 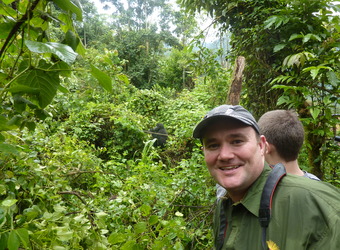 “In the heart of Central Africa, so high up that you shiver more than you sweat," wrote primatologist Dian Fossey, "are great, old volcanoes towering up almost 15,000 feet, and nearly covered with rich, green rainforest—the Virungas." On Rwanda’s western border with Congo, Volcanoes National Park encompasses the slopes of these ancient peaks where Fossey studied the famous “Gorillas in the Mist.” It is one of Africa’s oldest parks, established in 1925 expressly to protect the mountain gorilla. Trekking from cultivated foothills into vine-tangled depths in search of these magnificent creatures is not just a safari highlight, but a high point of a lifetime. To sit and match a gaze with the contemplative eyes of a huge silverback is one of the most poignant wildlife encounters on the planet. You are also sure to see chattering monkeys and melodic birds, and you may spy a giant forest hog or bushbuck. 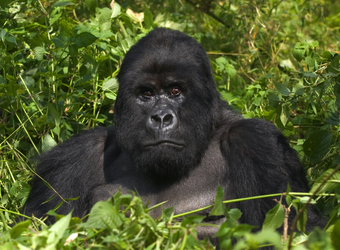 Rwanda’s tapestry of habitats is home to a diversity of species including mountain gorilla, chimpanzee, golden monkey, hippo giraffe, zebra, leopard, crocodile and more than 600 species of birds. Ten percent of Rwanda is designated as Important Birding Areas. Plains and lakes dominate the eastern borders while Rwanda’s western mountains are draped in forest. This mosaic of montane ecosystems in Volcanoes National Park—bamboo and woodland forest, heath and swamp—is where the mountain gorilla lives, along with 12 other species of primates. Ten habituated gorilla groups are open to tourist visits, with a maximum of 8 visitors to each group for a one-hour period per day. Nearly 200 of Rwanda’s bird species are also found within the park including 29 endemics, as well as giant forest hog, warthog, bush pig, forest elephant, buffalo, bushbuck, waterbuck, black-fronted duiker, spotted hyena, civet, genet, mongoose and tree hyrax. 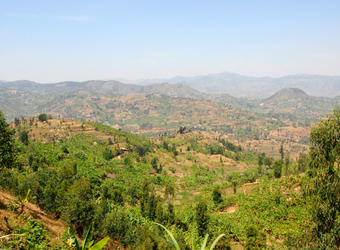 Called the Land of a Thousand Hills, Rwanda is a tiny country at the geographic heart of Africa bordering Burundi, the Democratic Republic of the Congo, Uganda and Tanzania. Just over 10,000 square miles, Rwanda is slightly smaller than the state of Maryland yet has 11 million people, the most densely populated country in Africa. Its capital, Kigali, is home to about 1 million. Rwandans are young, predominantly rural and employed mostly In subsistence agriculture. Rwanda gained independence from Belgium in 1962. Its politics have long been colored by conflicts between the nation's two dominant ethnic groups, Hutus and Tutsi. Rwanda is still recovering from aftermath of a civil war that culminated in the 1994 genocide in which more than 800,000 people, mostly Tutsis, were killed. Despite its travails, Rwanda is a positive, peaceable country today. Tourism is Rwanda’s primary foreign exchange earner, and minerals have recently overtaken coffee and tea as the top export. 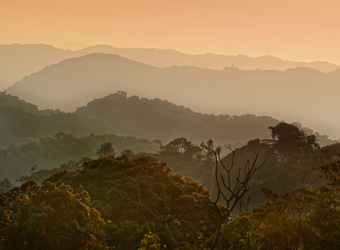 Rwanda faces great challenges in conserving its heavily taxed natural resources, especially dwindling habitat for its highly endangered mountain gorillas. Yet Rwanda has managed to make progress despite pressures from overpopulation, poverty and political instability. While deforestation, erosion and poaching remain major problems, President Kagame, a committed environmentalist, understands the value of intact ecosystems, and Rwanda is working on re-forestation and maintaining biodiversity. The government’s goal is to re-establish the forest cover that once covered 1/3 of the country. Central to that effort is assisting local communities by planting pines in buffer zones to harvest for firewood, learning to identify and sell medicinal plants, and creating jobs in ecotourism. Rwanda is also involved in important cross-border conservation policy with Uganda and Congo, and the largest remaining block of mountain forest in East Africa, the Nyungwe-Kibira Landscape, a contiguous protected area shared with Burundi that shelters a variety of endangered primates including chimpanzees.

(5.00)
Review Rwanda
Month of travel: July
"Rwanda is such a truly beautiful country. I have never felt so safe in any of the countries I've visited, and I've visited a few in Africa. This country has learned from terrible tragedy and rebounded in a beautiful way. The people are most gracious and welcoming. It is one of the cleanest countries I've ever seen and all residents take great pride in this. Volcanoes National Park is a piece of heaven. Don't miss the Golden Monkeys, but the Gorillas are the best experience I've ever had. The time you are in with the gorillas sounds short, but the experience, is priceless and worth ever penny! It is a feeling of visiting a family and you are welcomed and a part if it all. Our treks were pretty easy, so don't let some of the things you read worry you about it. Definitely hire a porter and help support the local people. Priceless!!!!!"
- D. Bennett Hagan
Month of travel: February
"The first thing that struck me about Rwanda when I arrived was the remarkable cleanliness of the city streets in Kigali. I found the locals to be extremely welcoming and kind, polite, soft-spoken and with what felt like a deep sense of cultural pride. This impressed me very much. Making our way out of the city, I found the country itself to be absolutely breathtaking. Picture a series of dramatic volcano peaks, lush and green and often shrouded in mist, set against the deep, rich blue of the sky...and the excitement of the knowledge that you're about to trek into those jungles in search of mountain gorillas. Seeing gorillas in their natural habitat was one of the most magical wildlife encounters I've ever experienced. On our second trek, we encountered a family of gorillas enjoying their social hour; it was quite a thrill to watch them tumble through the forest, climbing, playing and interacting with one another, seemingly unaffected by the awed presence of our little band of humans. The 2 treks we did were of varying length and difficulty, but we felt we were in good hands the entire time with our guides, trackers and porters. As we made our way back to the lodge for the night, we passed small, bustling villages and colorful, terraced hillside farms, enjoying the sight of families commuting together by bicycle. The country surprised me with its richness and beauty, but the warmth of the people and the peaceful rhythms of life in the country very much won me over. "
- Anonymous
Month of travel: February
"Rwanda is a stunning country. You never picture Africa this lush with such breathtaking scenery, hills and mountains. It's so clean and safe feeling, the people are very kind. I enjoyed viewing the gorillas in Rwanda because the treks are fairly easy in most cases, and we saw two totally different gorilla families on two different mountains! They are very relaxed with humans nearby, I even had a baby walk over my shoes! Seeing a silverback horse around with one of the juvenile's in play was remarkable."
- L. Halvorson

Safari Itineraries that include Rwanda