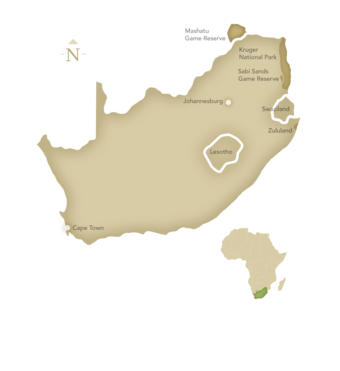 While South Africa’s wealth is often associated with its diamonds, nature lovers know its greatest riches lie in another of its treasures: its wildlife. Kruger National Park, Sabi Sand and other bushveld reserves protect an astounding diversity of animals, many of which are recovering from earlier threats to their survival. From the massive African elephant to the sleek leopard, from squat rhinos to regal lions, the Big Five and plenty of others are here in prolific numbers, providing one of Africa’s greatest safari experiences. And when it’s over, one thing is certain: You’ll go home richer than when you arrived.

Read About the Different Regions and Parks in South Africa

South Africa is a beautifully diverse country, not only in terms of culture, but also in wildlife. One of the largest game reserves in Africa, Kruger National Park, is on my agenda each time I go. I will never forget following a pride of six lion brothers, communicating to each other just feet away from our vehicle. I still get chills just thinking about it. Beyond wildlife, South Africa offers a range of interests for everyone, from its rich and often-troubled history to the celebrated wines of Cape Town. It's the plethora of wildlife and wonderful people that keep me coming back! 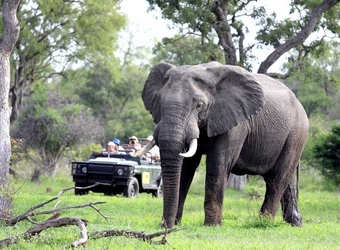 South Africa’s wildlife is legendary, including the famous Big Five—lion, leopard, rhino, buffalo and elephant. So named originally because they were the most dangerous to hunt, now they are the targets of photographers. You’ll find them all in world-renowned Kruger National Park, established in 1898. Kruger’s nearly 5 million acres provide sanctuary for an exceptionally diverse mix of Lowveld species. Adjacent Sabi Sand Reserve is the oldest private wildlife reserve in South Africa, pioneering sustainable tourism. Its vast wilderness offers Africa’s most frequent encounters with the elusive leopard, as well as cheetah, giraffe, zebra, a huge variety of antelope and more than 500 bird species. Sabi Sand is also home to some of the most luxurious safari camps in Africa. Just across the Limpopo River in neighboring Botswana, the private wilderness reserve of Mashatu also offers outstanding game viewing, including night drives to observe nocturnal hunting activity. 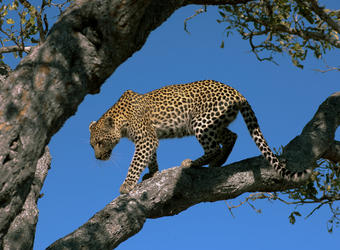 South Africa’s diverse geography, encompassing deserts, forests, mountains, grasslands and coast, supports an astonishing variety of wildlife. Kruger National Park alone has 16 different vegetation zones fed by six rivers, sustaining a multitude of game including 10,000 elephant, 20,000 buffalo and endangered species such as black and white rhino, wild dog, cheetah and lion. Sabi Sand is known for its quality leopard viewing. The private reserve boasts one of the most stable and biodiverse wildlife populations anywhere in Africa, drawn to the steady water supply of the Sand and Sabie rivers. The “giants” of Mashatu Game Reserve include large bull elephants, ostrich and eland, the world’s largest antelope. On your South Africa safari you can expect to see elephant, lion, buffalo, hippo, giraffe, zebra, hyena, wildebeest, warthog, baboon and a huge variety of antelope including kudu and gemsbok. You may also see rhino, leopard, cheetah, wild dog and aardwolf. 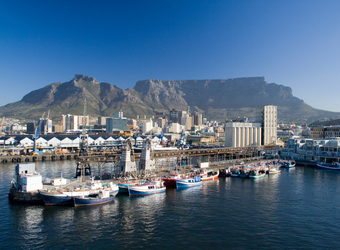 The parliamentary democracy that is the Republic of South Africa was established in 1994 after more than three centuries of colonial conquest and ensuing conflicts. If there is one word that encompasses the country today, it is diversity. Beyond its varied geography and climate, South Africa has a plethora of cultures and 11 official languages. Nearly 80% of its 50 million people are of black African descent, with the remainder of European, Asian or mixed-race ancestry. Located on Africa’s southern tip, South Africa covers 471,000 square miles and has a 1,739-mile coastline on the Indian and Atlantic oceans. The interior is flat scrubland becoming drier along the Namib Desert to the northwest, while the east coast is lush and subtropical. Wildlife is most abundant in the dry, mixed-forest Bushveld in the north. South Africa has Africa’s largest economy, dominated by mineral extraction and agriculture, yet great disparities in income equality persist. 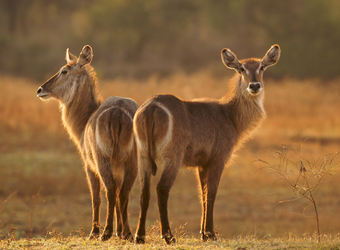 For centuries, wildlife roamed in enormous numbers throughout eastern South Africa. By the late 1800s, rampant trophy hunting began to decimate the prolific herds and prides and packs, while habitat loss accelerated through the spread of agriculture. As wildlife began disappearing rapidly, South Africa’s people started lobbying the government to protect it. In 1889, President Paul Kruger established the Sabi Game Reserve. National parks followed in 1926, the first of which bore his name. Today South Africa is a global leader in wildlife conservation. Ecotourism and photographic wildlife safaris displaced professional hunting on private game farms during the 1980s, and tourism is now the region’s biggest industry, spurring widespread community support for conservation initiatives. Poaching remains a problem, though, with the government engaged in a fierce battle to save the country’s white and black rhinoceros that were reintroduced into Kruger National Park in the 1960s.

(5.00)
Review South Africa
Month of travel: January
"South Africa has a world of diversity (in landscapes, in activities, in wildlife, in people) crammed into one incredible country. Cape Town is one of the most vibrant and beautiful cities on earth. The Kruger National Park and the surrounding private reserves hold some of the most accessible game viewing in Africa. The Garden Route and other coast lines provide some great beach time. Wine regions like Stellenbosch offer tasty cuisine. The Drakensburg mountains and other unique geological formations create incredible vistas and landscapes to be explored. You could spend months in SA and not see it all. "
- O. Gerhold
Month of travel: June
"I could go to South Africa over and over. There's just so much to choose from. You can go on a great safari in Kruger or Sabi Sand, learn about the history in Johannesberg, see the marine mammals in Cape Town while also getting some great dining and shopping in, take an overnight luxury train, and go mountain biking, surfing, wine tasting or shark cage diving. My garden club did a trip in 2012 to visit the Cape Floral Kingdom, among other things!"
- E. Bednar

Safari Itineraries that include South Africa