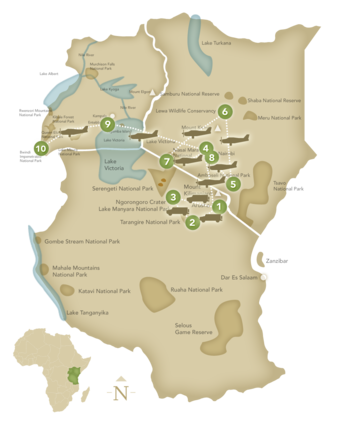 “Epic” is an oft-used superlative, but for this safari, it’s absolutely apt. Picture prides of lion in the Maasai Mara lying in wait for zebra and gazelle. Or great congregations of elephants crowded around Tarangire’s lifegiving springs when the plains have turned to dust. Ngorongoro Crater is a veritable Noah’s Ark of species. And meeting mountain gorillas in Bwindi Forest may be the most epic wildlife encounter of all.

“Epic” really is the only way to describe this adventure. A visit to just one or two of the wildlife reserves included on this route would be a ‘once-in-a-lifetime’ experience for most people. Yet to see everything from the remarkable concentration of game in the Ngorongoro Crater, to the Great Migration in the Maasai Mara, to mountain gorillas in Bwindi, just feet away, all in one trip…it can't get much better than this!