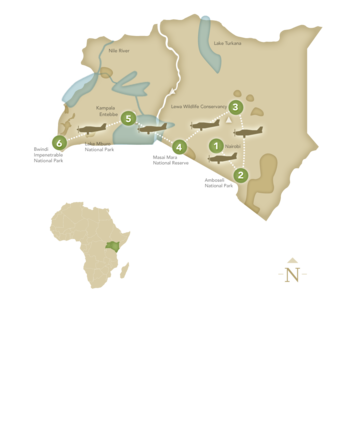 A traditional Kenyan safari plus the mountain gorillas of Uganda—this is a well-rounded East Africa safari encompassing a wide variety of wildlife encounters in an array of habitats. Each is more exhilarating than the next, as you watch enormous elephants in Amboseli, track endangered rhinos at Lewa, marvel at lion prides in the Maasai Mara and – the ultimate finale – trek into the depths of Bwindi Impenetrable Forest to meet the world’s last remaining mountain gorillas.

This route offers a great combination of experiences. The elephants of Amboseli, the rhinos of Lewa, the Big Five in the Maasai Mara, then culminating with the mountain gorillas in Uganda--it's the perfect well-rounded feel for what East Africa has to offer.