Click here to be the first to review Tarangire Nat'l Park 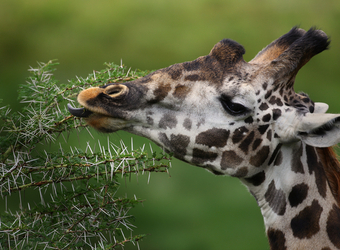 Tarangire is best visited in the dry season, when thousands of animals flock to the pools of the Tarangire River to drink. At just over 1,000 square miles, Tarangire offers activities rarely available in other Tanzania national parks. Walking safaris can last an hour, a day or multiple days with fly camping in between. Observing elephant and other wildlife on foot, away from vehicle noise, is a common experience here. Of course, morning and afternoon wildlife drives by open or closed 4x4 safari vehicles are also a great way to get close to animals. Tarangire has the added benefit of off-road driving and night drives to seek out nocturnal species and night-hunting predators. Enjoy bush meals or traditional boma dinners under the stars. Arguably showcasing East Africa’s best bird diversity, Tarangire’s swamps are home to one of the largest arrays of breeding birds in the world. 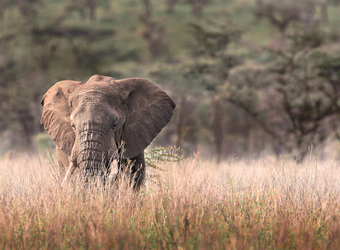 Tarangire is best known for its large elephant herds, sometimes reaching 300 strong. In the dry season the Tarangire River, though shallow, draws thousands of animals from the surrounding parched land to drink. Elephants dig into the riverbed to reveal underground water, and clamoring migratory wildlife, including wildebeest, buffalo, zebra, impala, eland, hartebeest and gazelle, gather to drink from diminished lagoons. Dry-country antelope that aren’t seen elsewhere in Tanzania, namely the fringe-eared oryx and gerenuk, are regularly on view in Tarangire. The park is also known for its tree-climbing lions, as well as leopard and cheetah. Tarangire has the best bird diversity in East Africa with 550 species, including ostrich, the world’s largest bird, and kori bustard, the heaviest flying bird. The yellow-collared lovebird is often spotted along the river, along with the rufous-tailed weaver and ashy starling, all endemic to northern Tanzania’s dry savanna. 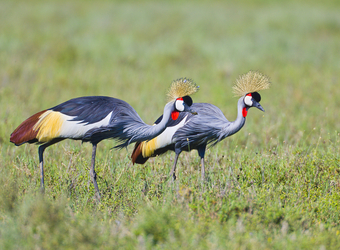 How to Include Tarangire in Your Safari Itinerary

Often the first or second stop on a northern Tanzania safari, Tarangire is an appealing short-stay destination. Nearby Lake Manyara is a great one-night stop with your private guide, or you may just pass through for the day. Keep in mind that much of the wildlife migrates from Lake Manyara to Tarangire during the dry season, and flamingos are best spotted early in the year after the rains. The lush Ngorongoro Crater Conservation Area contrasts with the grassy plains of Tarangire and Lake Manyara, and you may also have a chance to see flamingos in the crater. Ending your safari with the Serengeti provides the opportunity to witness the migration of nearly two million wildebeest, zebra and Thomson’s gazelle over vast savanna, depending on the season. Zanzibar is a delightful beach extension, or adding Kenya’s Lewa and Laikipia region offers a chance to see endangered Grevy’s zebra and unique reticulated giraffe.