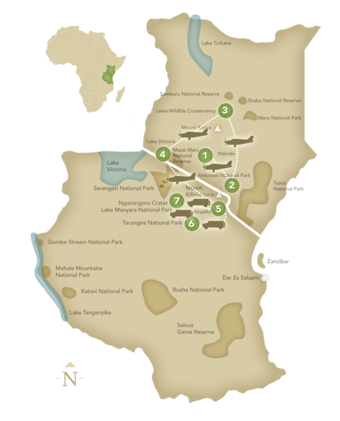 If your idea of the ultimate safari is a chance to see grazing herds on the wide-open savanna, lions stalking plains game, giraffe browsing in acacia trees and elephants trundling through the dust, this is it. Explore three of Kenya’s most extraordinary wildlife reserves, then head into Tanzania to discover Ngorongoro Crater and Tarangire, big elephant country where seasonal water draws prolific wildlife and ancient baobab trees dot the landscape.

When I think about a truly classic African safari, my first thought is always of East Africa’s expansive plains. This itinerary brings the "Out of Africa" images we’re all familiar with into immediate relief. Combining the best of both Kenya and Tanzania in just two weeks is a superlative way to experience incredible wildlife encounters and breathtaking scenery.