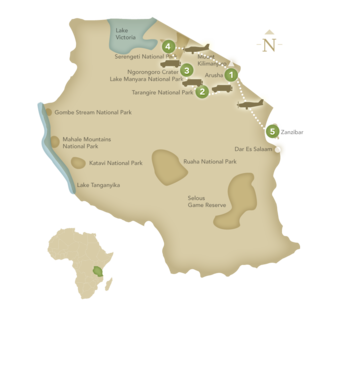 Tanzania is such a microcosm of Africa’s safari wonders that two full weeks in this single country can feel like a much longer, far-flung journey. In this case, you’ll travel from savanna to sea as you explore the teeming plains of the Serengeti; the wildlife-rich floor of Ngorongoro Crater; little-visited Tarangire National Park where underground springs draw huge numbers of animals—and the tropical Swahili coast, with a post-safari idyll on the romantic island of Zanzibar.

Tanzania is diverse indeed, and any safari-goer with a passion for “seeing it all” would do well to spend extended time here. Day to day the wildlife changes—one day it’s lions and leopards, the next it’s a million wildebeest! — and the environments change as well, from the world’s largest caldera, filled with animal life unique to that specific region, to the vast plains of the Serengeti, to the snowy peaks of Kilimanjaro. Yes, this special safari is truly an opportunity to see it all. 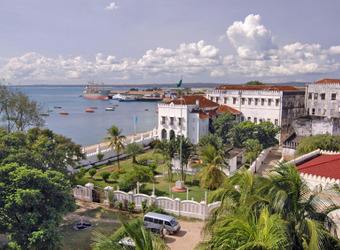 Mystical, magical Zanzibar. One of those fabled destinations that has long seduced travelers in search of an exotic escape. This island on East Africa’s Swahili Coast has attracted visitors for centuries, drawn to its exquisite white sand beaches edging the Indian Ocean, the winding alleys and merchants of old Stone Town, and its legendary spices. Explore Zanzibar’s collage of cultures and palm-fringed coast, for the perfect postlude to any safari.