Oliver’s Camps invites you into a tranquil retreat in the heart of one of Tanzania’s least visited, but most rewarding national parks. Set in the beautiful Baobab-studded wilderness of Tanzania’s Tarangire National Park, the intimate Oliver’s Camp provides guests with easy access to some of East Africa’s most prolific and diverse wildlife viewing experiences, including abundant populations of big cats and large herds of elephants.

Oliver’s Camp is perfect if you want a tented camp in a remarkable, secluded location but also want to enjoy a little bit of luxury. Also, I love to walk and there opportunities for that here! 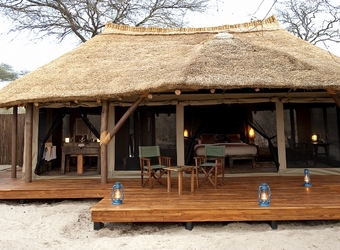 Located in a remote corner of southern Tarangire National Park, Oliver’s Camp exudes all the spirit and romance of a classic African safari camp. Guests at Oliver’s Camp are accommodated in just ten thatched roof chalets. Each unit is built on a wooden deck with canvas walls that can be rolled up to take advantage of cooling afternoon breezes. Simple yet elegant wooden furnishings and warm minimalist African decor imbue each suite with a distinctive, charming feel. The well-appointed en-suite bathrooms include private al-fresco showers. A thatched roof shades the central open-air lounge. Stone floors, an antique gramophone, romantic old-fashioned lanterns and African artifacts create an atmosphere that radiates a safari ambience of days-gone-by. Delicious home-cooked meals are served in the rustic tented dining area or in the open under the starry African skies. In the evening guests gather for a nightcap around a roaring campfire and reminisce about the day’s thrilling adventures. 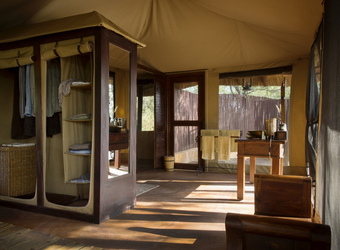 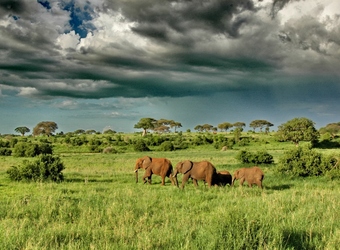 Tarangire National Park, the “Baobab Capital of the World,” is often overlooked in favor of Tanzania’s more famous safari destinations to the north, the Ngorongoro Crater and Serengeti. Boasting some of Tanzania’s greatest concentrations of wildlife, animal viewing in Tarangire is superb. Oliver’s Camp is perfectly situated to allow easy access to the yearly wildlife migrations as animals move through the park in search of water. Guests have an excellent chance of seeing lion, leopard and cheetah as well as herds of up to 300 elephants, buffalo, migratory wildebeest, zebra, buffalo, impala, gazelle, eland and wild dogs that roam the red-dust plains. The park also offers some of East Africa’s best birding. Activities include twice daily nature drives, and both nature walks and night drives can be prearranged at extra cost as well - talk to your Safari Specialist. Guided walks provide the incomparable thrill of tracking elephant on foot and can be done by guests 16 and older.

Tarangire has varying concentrations of wildlife viewing depending on the season, and the below chart helps to illustrate major wildlife sightings often experienced. Other typical sightings may include about 550 bird species and a number of other mammals and reptiles. Exact sightings will depend on seasonality and wildlife movements.

Safari Itineraries that include Oliver’s Camp 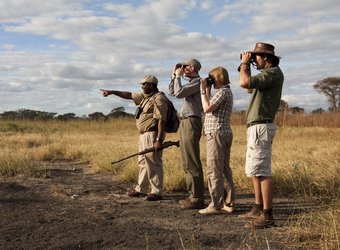 Oliver’s Camp supports the Terat Village Initiative, which is working to halt unsustainable land use practices in the area. Terat Village is 24 miles from Tarangire National Park, in the middle of the Simanjiro Plains, where thousands of wildebeest come to give birth each rainy season. Immigrants and local Maasai people have begun farming in the area, imperiling this important and delicate eco-system. The initiative provides financial support to the Terat Village to fund the construction of schools. In exchange, the village has agreed not to farm on the plains. The initiative also supports a village anti-poaching team. The initiative employs four scouts and equips them with bicycles, binoculars, and telephones. They patrol the area each day and report any poaching incidents to the local authorities. In addition, Oliver's Camp is the first African accommodation to be certified through Sustainable Travel International‘s Sustainable Travel Eco-certification Program (STEP), the globally recognized gold standard in eco-certification, for its ongoing sustainability initiatives.

(5.00)
Review Oliver’s Camp
Month of travel: June
"I stayed at Oliver’s for 3 nights in June, 2013, while visiting Tarangire National Park. I had previously stayed here in 2011 and loved the service, location, food, and game drives. So, I came back. Everything is still the same. This safari I traveled with friends. We had considered staying outside the park to save a few bucks, but as a friend of mine used to say, it only costs a little more to go first class. Everyone was glad we did. Tarangire is an awesome park. They advertise it as an elephant park but have plenty of wildlife. We saw hundreds of elephants and many more than we did in 2011. Unfortunately, these were small tuskers as I sadly assume poachers have killed the big ones. The elephants love the swamp. We just parked by the road and watched them go back and forth. My favorite memory was watching 2 youngsters playing and wrestling in the water. Then they were joined by a third. When I witness something like that I realize why there is a hell. That’s where poachers go!!! Saw 2 prides of lions including several cubs, 2 cheetah, huge herds of Cape buffalo, and lots of everything else. I think wildlife was more plentiful than in 2011, and I left impressed in 2011. The service at Oliver’s is terrific. A young couple is the resident managers, Justin and Jacky. They greet every game drive, and eat every meal with the guests. They literally make you feel at home. These guys and the entire staff work very long hours, but they are always there and always glad to see you. The camp has a large staff and they simply can’t do enough for you. I dealt mostly with the dining room staff and they were terrific. They light the campfire before dinner every night. It is a nice way to relax with a cold Kilimanjaro before dinner. Man can you see the stars!! We took the walking safari. It is nice to take after spending so much time sitting in a vehicle. This one was not as exciting as the one in 2011 when we apparently woke up a young lion, but it is worth it, especially if you have 3 days like we did. We tried to walk close to where one of the lion prides was hanging out and they quickly let us know they were there. Since I was there last, they now offer a nigh drive which we took. We did not see any big animals but did see small animals we did not see during the day (bat eared fox and some others). I saw a striped hyena for the first time. I understand these are endangered and are omnivores. They are nicer than their spotted cousins and don't steal kills from cheetahs and others. If you have the time, I recommend taking both. Overall, we had a fantastic stay. I highly recommend this camp for its location, service, facilities, and great food. I would return tomorrow. "
- C. Mata
Month of travel: March
"Great comfortable accommodations in a wilderness setting. Some of the best birding I have found in Tanzania. "
- J. Nitzsche 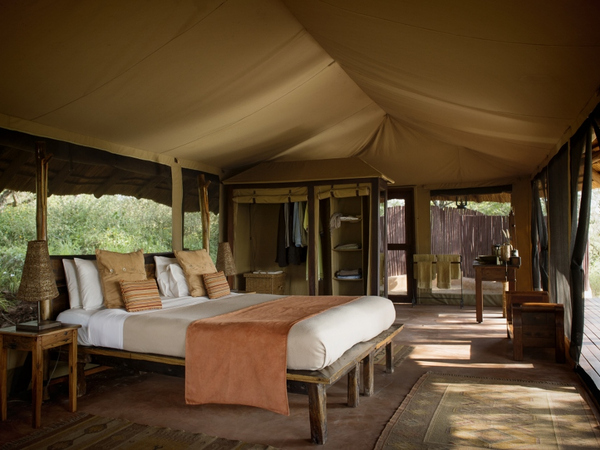 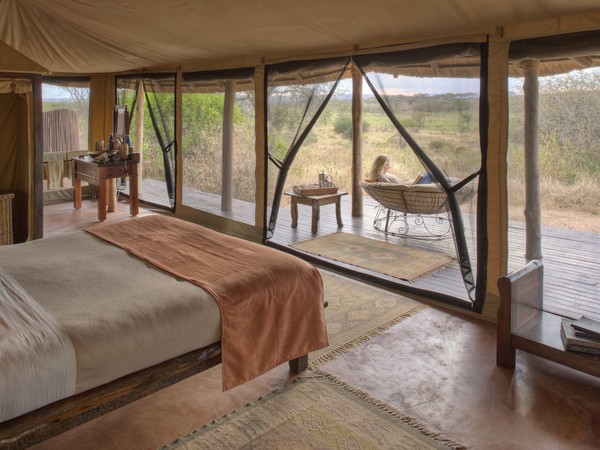 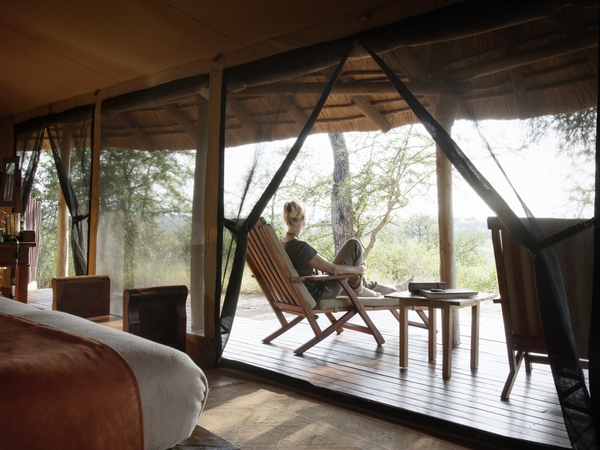 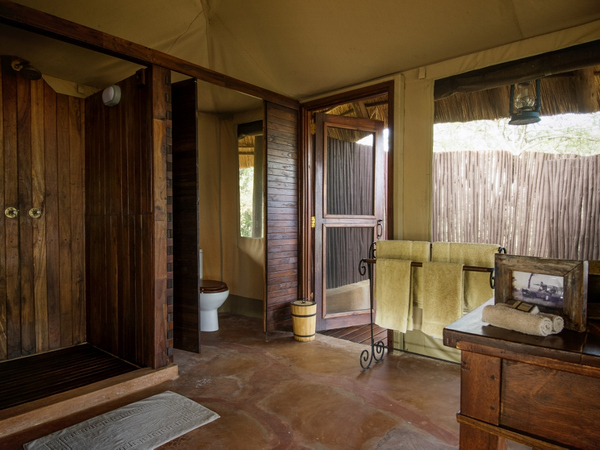 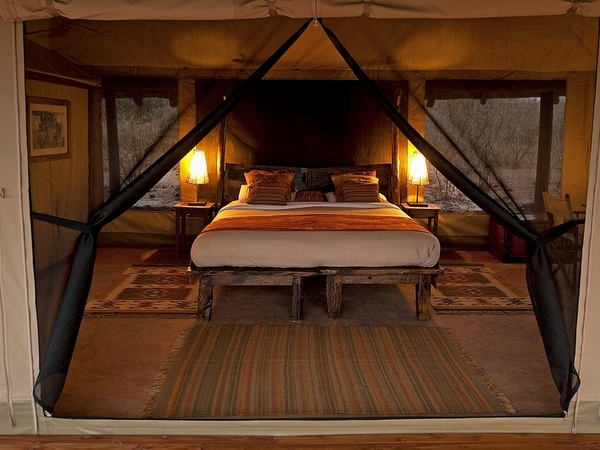 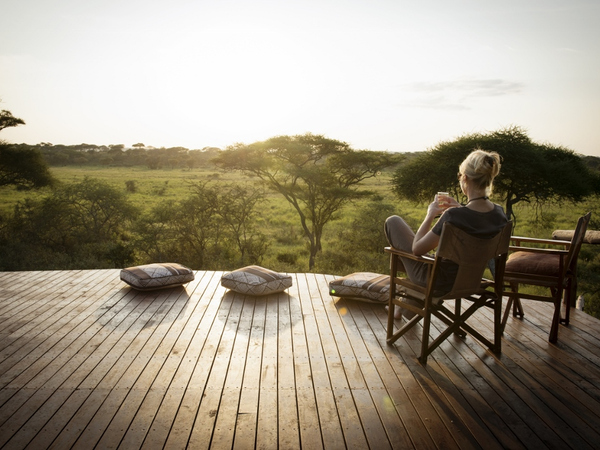 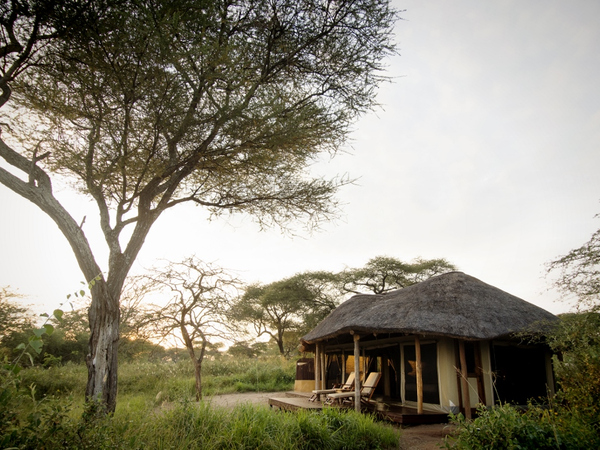 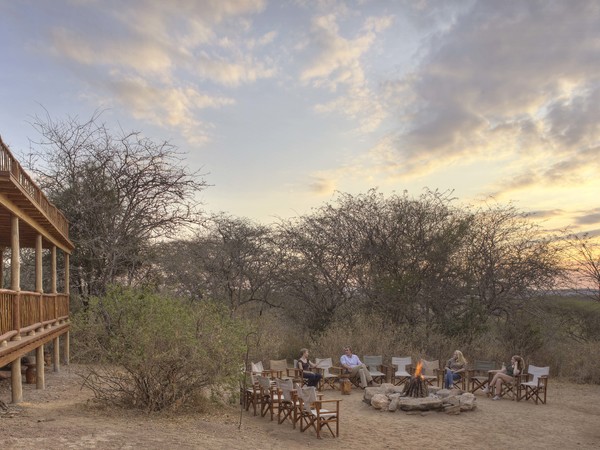 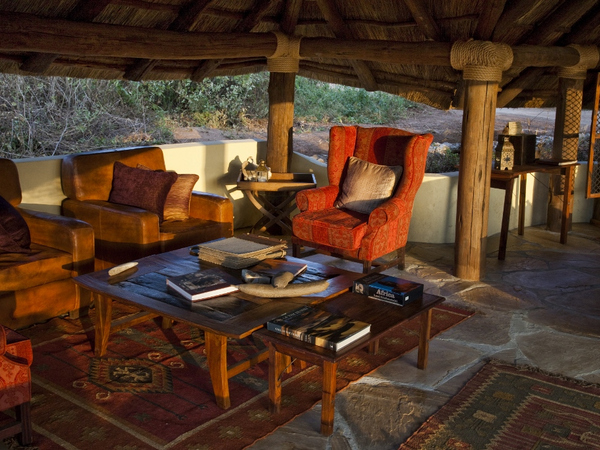 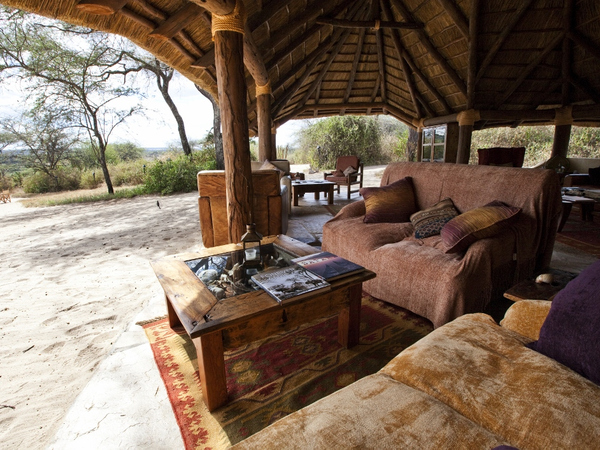 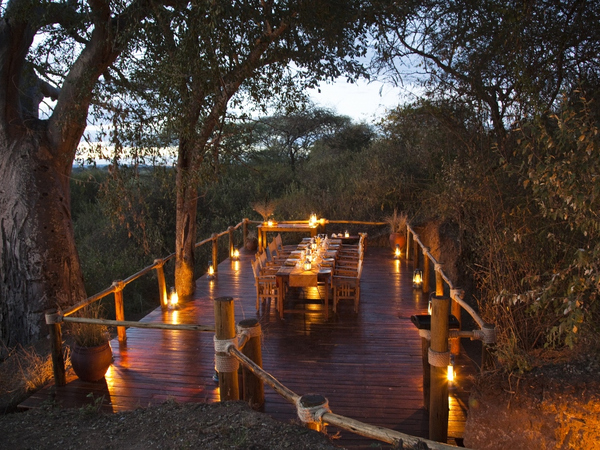 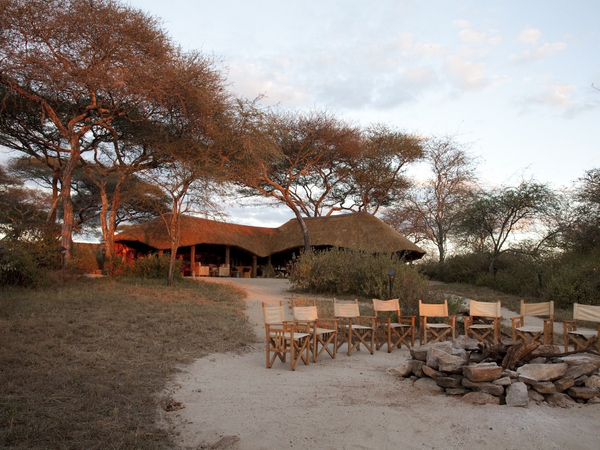 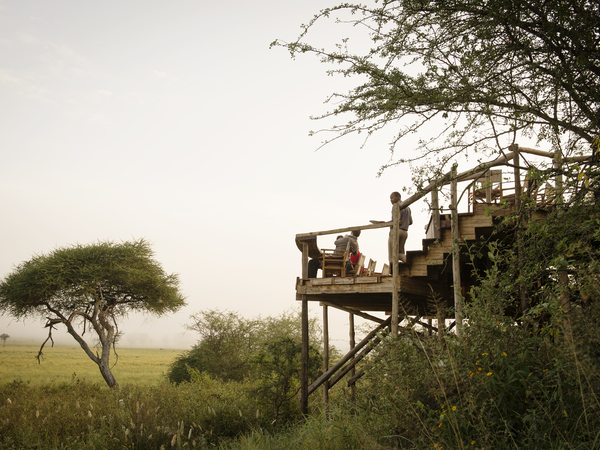 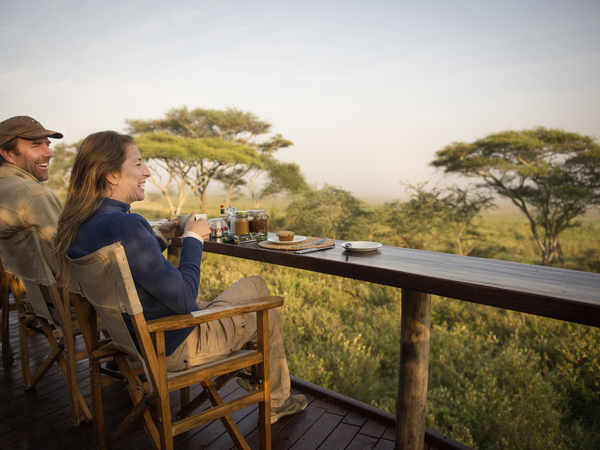 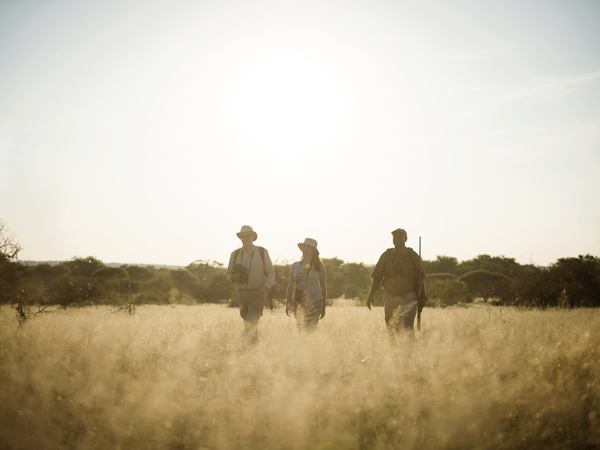 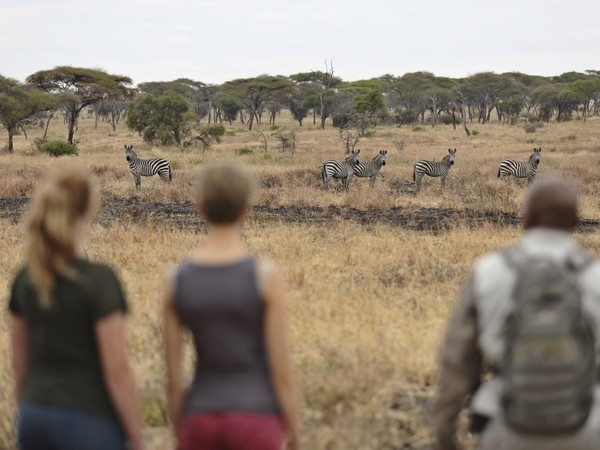