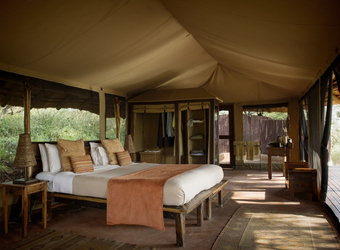 I stayed at Oliver’s for 3 nights in June, 2013, while visiting Tarangire National Park. I had previously stayed here in 2011 and loved the service, location, food, and game drives. So, I came back. Everything is still the same. This safari I traveled with friends. We had considered staying outside the park to save a few bucks, but as a friend of mine used to say, it only costs a little more to go first class. Everyone was glad we did. Tarangire is an awesome park. They advertise it as an elephant park but have plenty of wildlife. We saw hundreds of elephants and many more than we did in 2011. Unfortunately, these were small tuskers as I sadly assume poachers have killed the big ones. The elephants love the swamp. We just parked by the road and watched them go back and forth. My favorite memory was watching 2 youngsters playing and wrestling in the water. Then they were joined by a third. When I witness something like that I realize why there is a hell. That’s where poachers go!!! Saw 2 prides of lions including several cubs, 2 cheetah, huge herds of Cape buffalo, and lots of everything else. I think wildlife was more plentiful than in 2011, and I left impressed in 2011. The service at Oliver’s is terrific. A young couple is the resident managers, Justin and Jacky. They greet every game drive, and eat every meal with the guests. They literally make you feel at home. These guys and the entire staff work very long hours, but they are always there and always glad to see you. The camp has a large staff and they simply can’t do enough for you. I dealt mostly with the dining room staff and they were terrific. They light the campfire before dinner every night. It is a nice way to relax with a cold Kilimanjaro before dinner. Man can you see the stars!! We took the walking safari. It is nice to take after spending so much time sitting in a vehicle. This one was not as exciting as the one in 2011 when we apparently woke up a young lion, but it is worth it, especially if you have 3 days like we did. We tried to walk close to where one of the lion prides was hanging out and they quickly let us know they were there. Since I was there last, they now offer a nigh drive which we took. We did not see any big animals but did see small animals we did not see during the day (bat eared fox and some others). I saw a striped hyena for the first time. I understand these are endangered and are omnivores. They are nicer than their spotted cousins and don't steal kills from cheetahs and others. If you have the time, I recommend taking both. Overall, we had a fantastic stay. I highly recommend this camp for its location, service, facilities, and great food. I would return tomorrow.
- C. Mata
Return to: Oliver’s Camp
Close