Click here to be the first to review Damaraland 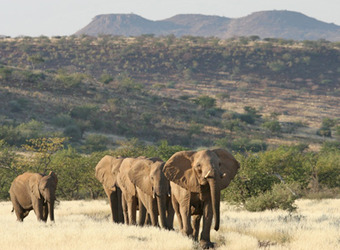 Huge, harsh and entrancingly beautiful, Damaraland contains some of the most amazing landscapes on earth. Brooding granite mountains and deep gorges, sun-baked wastes of sand and ancient petrified forest define this arid terrain. Yet remarkably, it is home to both people and animals who have adapted to these daunting environs. Scout for desert-adapted elephant, track black rhino in the Palmwag Concession, and wonder at some of the darkest, starriest skies on the planet. 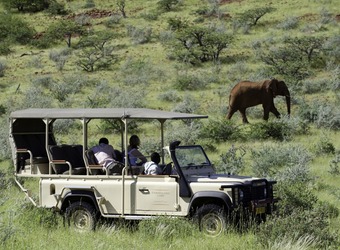 Set in the Huab River Valley, one of Namibia’s most pristine wilderness areas, Damaraland is surrounded by desert plains, age-old valleys and the towering Brandberg Mountains. Enjoy morning and afternoon wildlife drives and nature walks scouring this primitive landscape for desert-adapted elephant and other resident wildlife. View ancient rock art at nearby Twyfelfontein, a World Heritage Site inhabited for 6,000 years and used as a site of worship with an estimated 2,500 petroglyphs on 212 sandstone slabs. The adjacent Palmwag Reserve, a massive 1.1 million acres, is ideal for tracking free-roaming black rhino, and is home to Africa’s largest population of this endangered mammal and the Save the Rhino Trust headquarters. The landscape is scattered with euphorbia and shepherd’s trees, welwitschia plants, and scrubby vegetation. Both areas afford the flexibility of after-dark nature drives in search of nocturnal species. 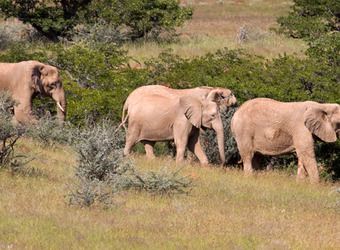 A unique focus in Damaraland and Palmwag is tracking desert-adapted elephant and black rhino on 4x4 drives and guided walks. Desert elephant are not a separate species, but they manage to eke out an existence along the riverbeds by eating local vegetation, which differs greatly from the more abundant plant life on which savanna elephant subsist. The black rhino of Palmwag is a subspecies found in South Africa as well. Other wildlife includes gemsbok, springbok, greater kudu, Hartmann’s mountain zebra, giraffe and occasionally predators such as lion, leopard, cheetah and both spotted and brown hyena. More than 240 bird species flourish in the conservancy, including raptors like the martial eagle and lappet-faced vulture. The endemic Benguela long-billed lark is found on the craggy mountain slopes, and Namaqua sandgrouse are often found in camp. More species are found along the dry Huab River in the camelthorn trees or ephemeral Huab River pools. 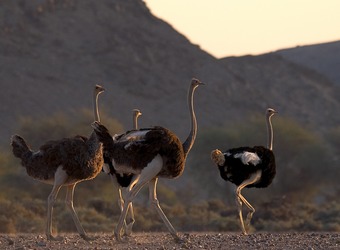 How to Include Damaraland in Your Safari Itinerary

Namibia makes for an excellent and well-rounded safari circuit combining the massive dunes and epic scenery of Sossusvlei, the desert-adapted wildlife and craggy landscape of Damaraland, the lush Kunene River oasis and mysterious desert environs of the Hartmann Valley, abundant wildlife and play of predator and prey in Etosha National Park, and the conservation efforts of Okonjima. Beyond Namibia’s primeval desert, venturing into Botswana’s Okavango Delta provides an enhanced wildlife experience set in a lush landscape teeming with predators, plains game and prolific birdlife. In the green season, Botswana’s Kalahari Desert fills with wildlife following the freshly sprouted grasses. View the great elephant herds of the Linyanti region for a contrast with those that survive in Namibia’s stark deserts.

Safari Itineraries that include Damaraland