Click here to be the first to review Makgadikgadi / Kalahari 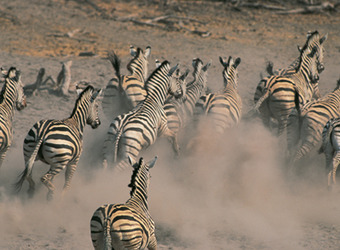 In the legendary Kalahari, the only sound is the silence ringing in your ears. Though arid and austere, the desert abounds with wildlife. Explore the Central Kalahari Game Reserve, where desert-adapted animals browse scrub-grass savanna. Or discover the Makgadikgadi Salt Pans, an immense ancient lakebed that is an important habitat for migrating wildebeest and zebra. Herds follow seasonal rains, trailed by predators like cheetah and the famous black-maned Kalahari lions. 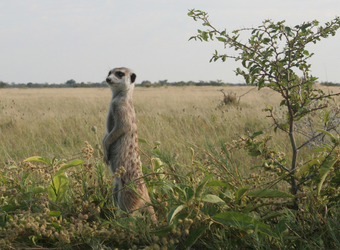 The semi-desert of the central and eastern Kalahari is able to support a greater array of flora than a true desert. Wildlife viewing on morning and afternoon wildlife drives by open, 4x4 safari vehicles, short walks from camp within a two-mile radius, and stargazing in the unspoiled skies are the more typical experiences while on safari in these areas. These areas are traditionally home to the San Bushmen. Bushman walks are often done, showcasing the traditional dress, hunting and gathering skills of this fascinating people. In a landscape seemingly uninhabitable in the dry winter, the Bushman pull up roots, hunt aardvark and have various other methods to sustaining life. The Makgadikgadi allows you to get up close with habituated meerkats in the wild, take quad-bikes over the moonscape of the salt pans to explore archaeological sites, or spend a night under the stars on the dry pans of this once ancient lake. 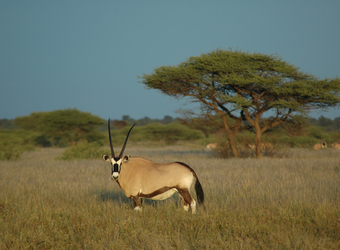 In the Central Kalahari, wildlife is sparse in the dry, winter months. Waterholes sustain some wildlife at this time, but the great influx occurs in the green season around November to February, when the rains sprout fresh grasses attracting herds of springbok, oryx and other plains game for grazing, congregating close water-filled pans. Predators follow prey, and the Kalahari becomes an action-filled parade of wildlife. The dry summer months in the Makgadikgadi feature adorable meerkats and brown hyena. During the early months of the year, Africa’s second largest natural migration moves into the uncharacteristically water-filled salt pans of the Makgadikgadi, an area that’s transitioned into a green wonderland set against dramatic, blue-gray storm clouds following seasonal rains. An estimated 20,000 plains zebra, as well as wildebeest, pour in from the western Boteti River and grasslands. The water-filled pans teem with flamingo and other migratory birds during this resurrection of the desert. 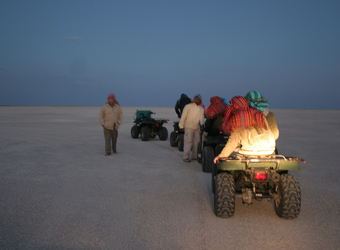 How to Include the Kalahari in Your Safari Itinerary

The Kalahari is best for wildlife in the green season, and at this time birding is excellent in the Okavango Delta and Linyanti regions of Botswana, and there is still resident wildlife ranging from predators to elephant to plains game dotting the landscape. Camps that feature both water and land activities tend to be better for wildlife viewing at this time, as they tend to have more water sources in the green season. The Botswana circuit is greatly complemented by the black and white rhino and desert-adapted elephant that can be found in Namibia’s Damaraland and Etosha regions. Visiting South Africa’s Kruger or Sabi Sand is a great way to end with some of the more plush safari camps, and the Southern Kalahari offers a similar landscape, but with great black rhino sightings. Victoria Falls tends to be reaching its peak flow during the green season, and it’s an easy addition to any region of Botswana, including the Kalahari.

Safari Itineraries that include Makgadikgadi / Kalahari