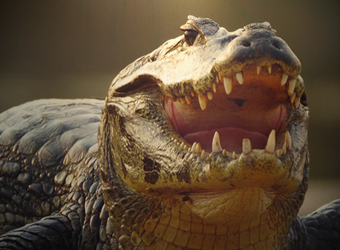 Crocodiles are an ancient lineage, and are believed to have changed little since the time of the dinosaurs. They are believed to be 200 million years old whereas dinosaurs became extinct sixty-five million years ago; crocodiles survived great extinction events. They live throughout the tropics in Africa, Asia, the Americas and Australia. Crocodiles do not have sweat glands and release heat through their mouths. They often sleep with their mouths open and may even pant like a dog.

Crocodiles are large aquatic reptiles and are among the more biologically complex reptiles despite their prehistoric look. Unlike other reptiles, they have a cerebral cortex; a four-chambered heart; and the functional equivalent of a diaphragm. Their external morphology, on the other hand is a sign of their aquatic and predatory lifestyle. 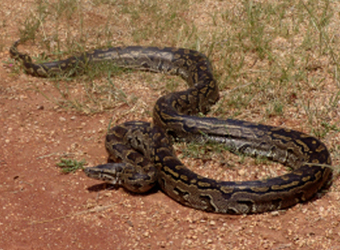 African rock pythons have a relatively small, triangular head that is covered in irregular scales that are typically blackish to brownish-gray in color. The head also has two light-colored bands that form a spearhead shape from the snout to the back of the head just above the eyes, as well as a yellow, inverted V under each eye. 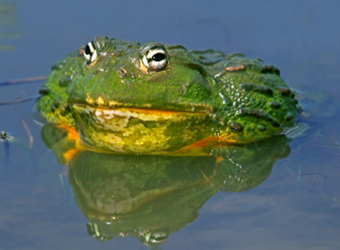 One of the most adaptable amphibians on earth, the African bullfrog can tolerate some of the harshest environments in Africa. Certain areas of their range can be completely dry for years at a time, and can reach surface temperatures over 100 degrees F, and drop to below freezing during the winter. Protected in an underground estivation chamber, the frogs wait it out until more suitable conditions occur. When the rainy season begins, they occupy temporary floodplains and rapidly drying puddles scattered around the African countryside.

The African bullfrog is carnivorous and a voracious eater, eating insects, small rodents, reptiles, small birds and other amphibians. Cannibalism is a common occurrence beginning the moment they metamorphose. Many of their first meals will be a member of the same egg mass. 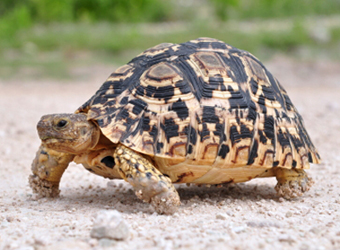 Endemic to Africa, the leopard tortoise is found in the savannas of eastern and southern Africa, from Sudan to the southern Cape. Leopard tortoises are the fourth largest tortoise species in the world and, in the wild they may live for up to 100 years. Their attractive shell patterns act like a camouflage and each individual is marked uniquely. They are more defensive than offensive, retracting feet and head into their shell for protection. This often results in a hissing sound, probably due to the squeezing of air from the lungs as the limbs and head are retracted.

Leopard tortoises are grazers that favor semi-arid, thorny to grassland habitats, although some have been found in rainier areas. In both very hot and very cold weather they may dwell in abandoned fox, jackal, or anteater holes. Leopard tortoises do not dig other than to make nests in which to lay eggs. 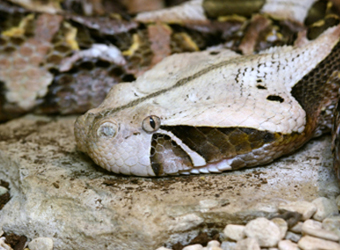 Gaboon vipers are found in rainforests and savannas throughout sub-Saharan Africa. They are the largest of the vipers. The head is large and triangular, while the neck is greatly narrowed: almost one-third the width of the head. The color pattern is truly stunning, forming a symmetrical design that makes a unique pattern on the scales. The base color is typically a brown or purple color. On top of that are yellow, quadrangular shapes that are aligned neatly over the center of the back. There is a very dark line down the center of the head and two dark spots above each side of the jaw.

Primarily nocturnal, gaboon vipers have a reputation for being slow-moving and placid. They usually hunt by ambush, often spending long periods motionless, waiting for suitable prey to happen by. 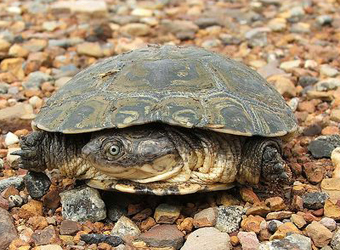 Found over a large portion of Africa, the African helmeted turtle is a semi-aquatic animal, living in rivers, lakes, and marshes. This turtle is omnivorous and will eat almost anything. Some of the main items in its diet are insects, small crustaceans, fish, earthworms, and snails. They may also feed on carrion. The fine claws on its feet help it tear its prey apart. Groups of African helmeted turtles have been observed capturing and drowning doves when they come to drink.

The female will lay two to ten eggs on average, normally during late spring and early summer. The eggs are placed in a flask shaped nest and hatch after seventy-five to ninety days. 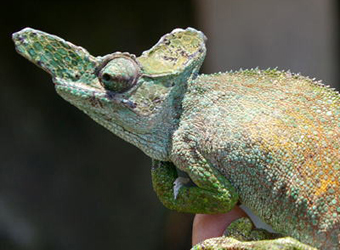 The Strange-nosed chameleon is native to the rainforests of the Ruwenzori Mountains of western Uganda and eastern Democratic Republic of Congo. They are named for the large protuberance extending from the top of the snout, particularly prominent on the males. This feature is composed of two separate plates extending outwards from either side of the snout and merging at the end.

Strange-nosed chameleons are olive to brown in color, sometimes with lateral orange or blue coloration. Males range more towards olive and females more towards brown. They have among the sharpest "teeth" and longest claws of any chameleon species. They are considered threatened due to habitat destruction and over-collecting for the live animal trade. 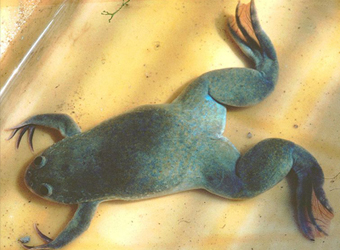 The African clawed frog occurs naturally in southern Africa. It lives in warm, stagnant grassland ponds as well as in streams in arid and semi-arid regions. Its name is derived from the three short claws on each hind foot, which it uses to tear apart its food.

Completely aquatic, the African clawed frog lacks a tongue. It uses its hands to shove food in its mouth and down its throat and a hypobranchial pump to draw or suck food in its mouth. It has powerful legs for swimming and lunging after food. It is a scavenger and eats living, dead, or dying arthropods and other pieces of organic waste. It has a voracious appetite and attacks anything that passes in front of it. It uses extremely sensitive fingers, an acute sense of smell, and its lateral line systems to locate food. 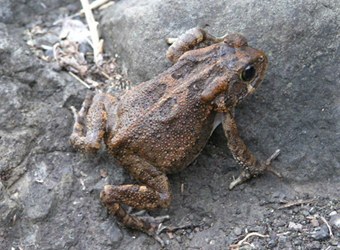 As its name indicates, the African common toad is very common. It is distributed throughout equatorial Africa from Angola, Botswana and South Africa to Mozambique, Kenya and the Democratic Republic of the Congo with populations on the increase. It is a very adaptable species occurring in a wide variety of savannahs, grassland, thickets, and agricultural land. It is able to breed in more or less permanent and semi-permanent standing water (it breeds frequently in garden pools). It has no major predators and does not suffer much from habitat loss.