Review For Rattray's on MalaMala 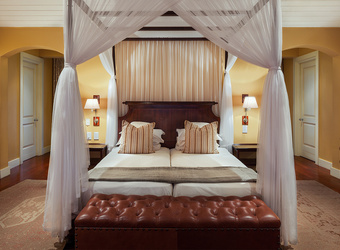 Our stay at Mala Mala exceeded our high expectations! Mala Mala is a huge private reserve (I believe it is the largest of the private reserves in the area) comprising 33,000 acres. It has the Sand River running through it and abuts Kruger National Park. Only vehicles from the Mala Mala camps are allowed on the reserve and they are allowed to go off road (unlike Kruger). There were never any more than 3 vehicles allowed at a sighting and we were frequently the only vehicle present. We chose to stay at Rattrays because there are no more than 4 people in each vehicle. The khayas are huge and luxurious with his and her bathrooms, plunge pool, and deck overlooking the Sand River. We saw elephants crossing the river, giraffes drinking, and a myriad of antelope from the deck of our khaya! Mala Mala's motto is "It is all about the wildlife" and if you are interested in seeing the "Big Five" and more, this is the place for you. We were not disappointed! Highlights of our 4 night/5 day stay with our fantastic ranger, Greg Baldwin, were seeing a leopard dragging her freshly killed impala along the ground to a tree (our first night drive!) and the next morning (our second game drive) sitting among a pack of wild dogs as they consumed their kill and fought off a hyena. We experienced the excitement of following the dogs off road and watched them run down another antelope. The rest of our game drives were also wonderful and we had many leopard sightings, elephants, cape buffalo, lion, rhino, hyenas, warthogs, giraffes, mongoose, jenet, wildebeast, baboons, vervet monkeys, zebras, vultures, raptors, different types of storks, and a wide variety of antelope. I am sure I am missing some of the many animals we saw. I suspect that going during the dry season enhanced our wildlife viewing as the animals were mostly concentrated around the river. It is unbelievable how close you are able to get to the animals, just don't stand up in the range rover and you will be just fine. We appreciated the care the rangers took to minimally disturb the animals while we were observing them. You will be very very busy and we barely had enough down time to download our pictures between the early morning game drives, bush walks, meals, and night drives. No place can beat Mala Mala in terms of the quality of the wildlife viewing and level of service and hospitality. If you want fantastic wildlife viewing that is unbeatable, come to Mala Mala!
- V. Huang
iSafari.com's response:
You give such an excellent and accurate review of MalaMala! Thank you!
Return to: Rattray's on MalaMala
Close