Kalahari Plains Camp, in the Central Kalahari Game Reserve, offers one of the most remote safari experiences in Botswana today. This camp is beautifully placed within the Kalahari Desert biome, a place famed for its magnificent wildlife with vast herds of antelope followed by abundant predators - including cheetahs, leopards and the legendary black-maned Kalahari lions.

A visit to the Kalahari is a must for anyone who has read the fantastic books by Mark and Delia Owens. Kalahari Plains camp has sweeping views of an immense pan, so keep an eye out for legendary Kalahari black-maned lion. Enjoy being lulled to sleep by the sounds of the wildlife reserve on the sleep-out bed above your tent! 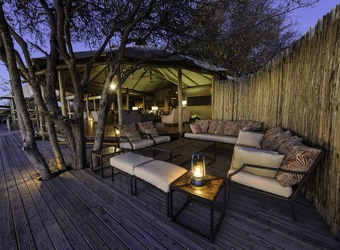 Kalahari Plains Camp is perfectly situated overlooking an immense pan with endless horizons. Nine simple yet comfortable tents have been constructed along traditional lines, each with a private deck upon which to relax and view the plains. Rustic rather than basic in style, each tent has an en suite bathroom, flush toilet, shower, zip-up doors, roll-up canvas windows, cozy twin or double beds, cotton robes, writing desk and fan. The main area consists of an inviting swimming pool and deck, a lounge, wood-top bar and stools (a popular pre-dinner gathering spot to trade your day-time adventures) and dining area. The tents and main area are all raised off the ground to catch the breeze and take in the sweeping, spacious views across the Kalahari. Kalahari Plains is a 100% solar-powered camp. Several hammocks strung up in nearby trees are inviting resting places for the afternoon, and beyond this is the campfire for story telling and stargazing. 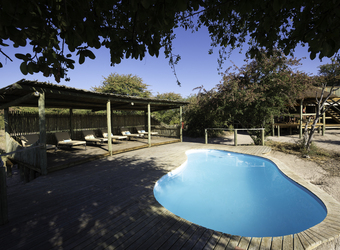 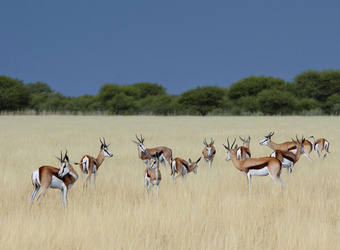 Healthy wildlife populations move through the area and are present all year round, but with the advent of the summer rains, the desert truly comes to life. Short grasses sprout in the pan systems and fossil riverbeds, attracting a plethora of plains wildlife such as springbok and gemsbok, which converge by the thousands to graze. Wildebeest, steenbok and red hartebeest join in the feast, followed in turn by predators such as the legendary Kalahari black-mane lion, abundant cheetah, hyena and caracal. Black-backed jackal, meerkat, Cape fox, honey badger and mongoose and over 220 bird species also thrive here. All of this is perfectly complemented by lush green landscapes, floral displays and endless blue skies. Guided wildlife drives unlock the fascinating wildlife treasures found in this wonderful area. The camp also offers an interpretive "Bushman Walk," where guests gain insights into the unique culture of several Bushmen clans that have thrived in this area for centuries.

Antelope tend to migrate into the central and eastern Kalahari deserts following water and grasses between December and April, often followed by predators. During the driest months from June to October, the landscape hosts fewer large mammals but the most commonly viewed animals at this time may be gemsbok, springbok, red hartebeest and steenbok and a number of other small mammals, birds and reptiles. Exact sightings will depend on weather and wildlife movements. 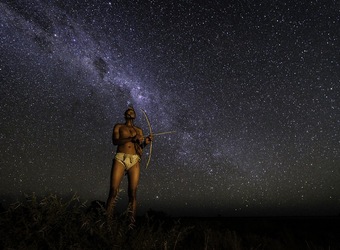 As Kalahari Plains Camp settles in, various conservation and community initiatives are being put into place. These involve the unique Kalahari fauna and various ecological monitoring projects. The camp’s guides work closely with the coordinators of the Central Kalahari Wild Dog Project and the Okavango-Kalahari Wild Dog Research Project.  In addition, Kalahari Plains Camp has actively engaged the local Basarwa (Bushman) people, supporting them through ecotourism programs. A number of local Bushman clans, also known as Basarwa, have lived in this area for thousands of years. Originally nomadic hunter-gatherers, their lifestyle has gradually changed and they now live mostly in the southern half of the Central Kalahari Game Reserve. A majority of the camp’s staff members hail from local villages, providing a vital link between Kalahari Plains Camp and the Basarwa people of Botswana.

(4.67)
Review Kalahari Plains Camp
Month of travel: February
"Kalahari Plains Camp was our first stop on this particular trip to Africa. It was rustic, but extremely comfortable considering how isolated it is. We dined outside under the stars (great food) and you could sleep outside on the upper deck of your tent if you wanted. What a view! The first night we heard a lion roaring all night. This was just a preview of things to come. In the morning, our guide Thuto (who was the absolute best)!showed us the lion's footprints in the sand -he had walked right by our tent. How cool is that?! We found him on our game drive, a beautiful male in the prime of his life. He had found who he was calling for - a female in oestrus. We got wonderful photos. We saw lots of animals and birds we didn't see elsewhere such as black backed jackals, oryx, a close-up tawny eagle, many more, and of course, the black maned lions. We were lucky enough to come across a large male lion in Deception Valley finishing up his meal that his females had killed. We loved this introduction to Botswana with a totally different landscape and variety of wildlife than anywhere else we visited. Pauline Harmon "
- P. Harmon
Month of travel: January
"Kalahari Plains Camp was our introduction to Botswana. It was the perfect starting point with the dry sands, flat pans, and open vistas. Little did we realize how close the mating lions were going to be the very first night when they were calling within a few feet of our tents! The staff were wonderful and the tents were quite comfortable. It made such an amazing contrast to our next camps in the Okavango Delta. We saw a variety of birds here not seen later in the Delta."
- T. Blase
Month of travel: January
"The Kalahari Plains Camp is fantastic! The tented cabins were so comfortable and I loved the top deck on the front. We slept out on the deck the first night and loved hearing the lions call to each other across the pan. The staff went above and beyond to ensure a wonderful stay. "
- C. Gibson
Month of travel: April
"We flew down in a bush plane from the Okavanga Delta and watched from the air as the delta melted into the sandy pans of the Central Kalahari. The camp was fairly new when we were there in 2010, and very nice with a helpful and engaging staff. Everyone was on a first name basis. The guides were great, showing and teaching us all about the ecology, flora, and fauna of the area. The food was marvelous and served in an open, covered dining area. The tent cabins were fully equipped with running water, showers, and a screened in panoramic view overlooking a pan with broad vistas of the stars at night from a safe balcony up top (including the southern cross). The blackmaned lions were never far away and we could often hear their roars rumbling through the camp day or night. As usual we were never unescorted in the camp from dusk to dawn. The cold pool felt especially good during the hot noonday breaks from safaris. On our way to and from Deception Valley in open safari vehicles, we saw the likes of giraffe and gemsbok (oryx) herds, breeding blackmaned lions with a forlorn brother waiting in the wings, springy springboks that performed on pogo stick-like legs, an occasional steenbok, blackbacked jackals, cheetahs, hartebeasts,and an evening glimpse of a rattel (honey badger). Many of the birds were peculiar and somewhat unique to that area...secretary birds, ostrich flocks, weavers, bul buls, koribustards, goshawks, northern black korhans, redbreasted shrike, shaft-tailed whydah, and much more. The changing colors of the dune flora were a photographer's delight....purple pod terminalia, russet bush willows, bushy foxtail grass, silky bushman's grass, and widespreading acacia trees. All in all, this safari camp and the adventures it provided met and exceeded all expectations. Give this one a top rating."
- J. Dixon
Month of travel: January
"Kalahari Plains Camp was the first stop on our 12-day Botswana Safari. It was my second trip to Africa, and we spent two nights here. The wildlife wasn't crazy active, but I loved the camp as a starting point: The pans of the kalahari offer a completely different feel that the jungles and water ways of the Okavango Delta. I really enjoyed the drive to Deception Valley and learning about the desert ecology from our guide, Russell. We spent our last night on the top deck under brilliant stars accompanied by lion vocalizations. I would definitely recommend Kalahari Plains Camp, especially as a camp to start a safari with. It will give you a broad perspective to compare other camps and areas to."
- L. Hodkiewicz
Month of travel: February
"I had one of the most knowledgeable guides among all my Botswana camps in Rogers - amazing man! The bushman walk was really informative and falling asleep to the 'din' of the barking geckos was a real treat. And I saw my first honey badger! "
- S. Rohan 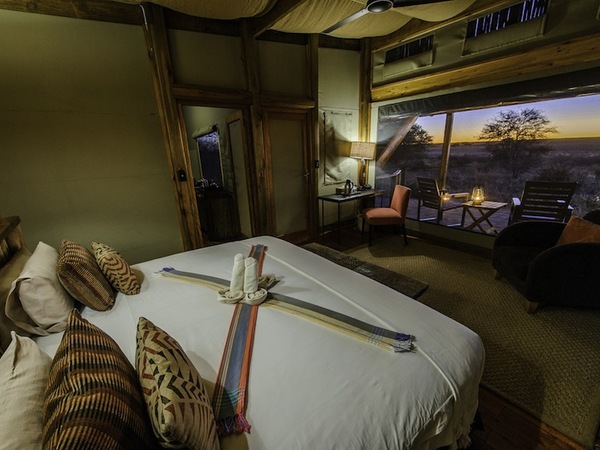 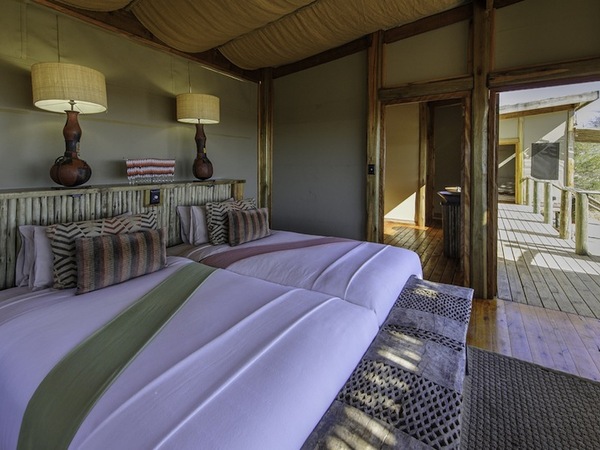 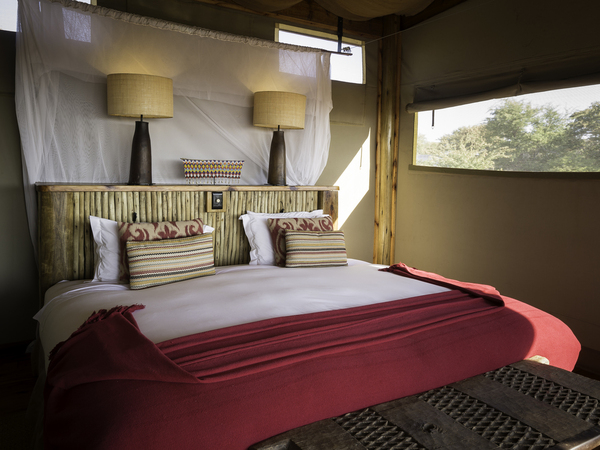 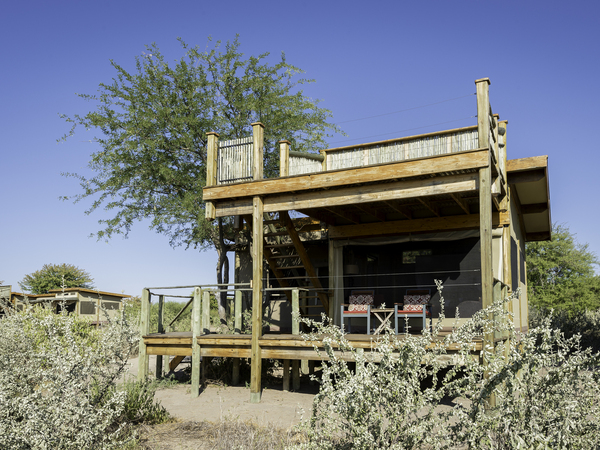 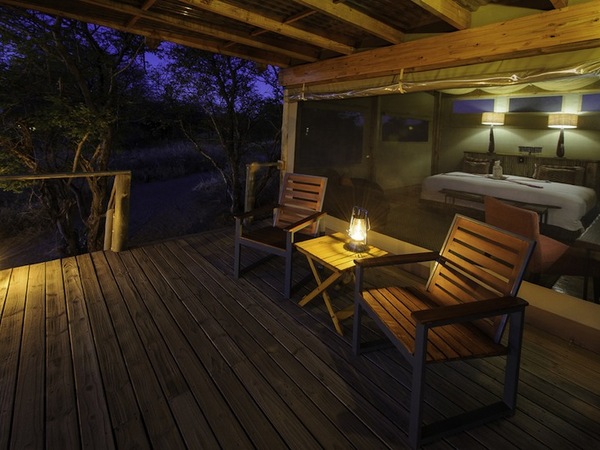 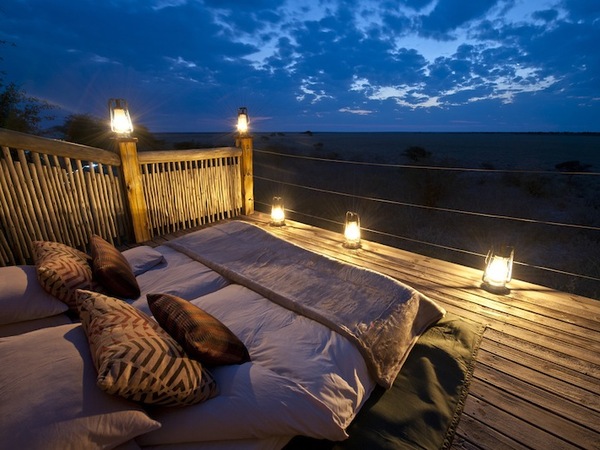 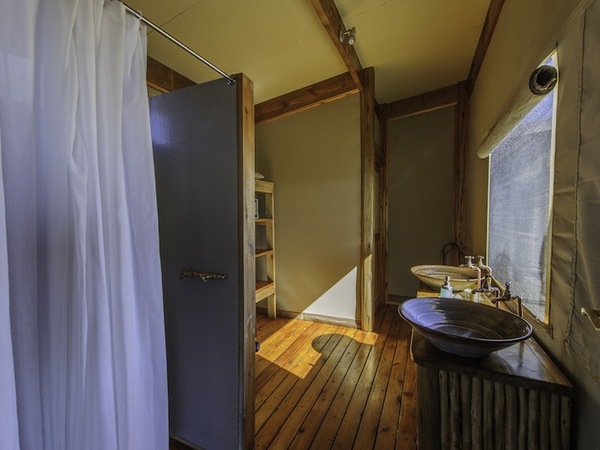 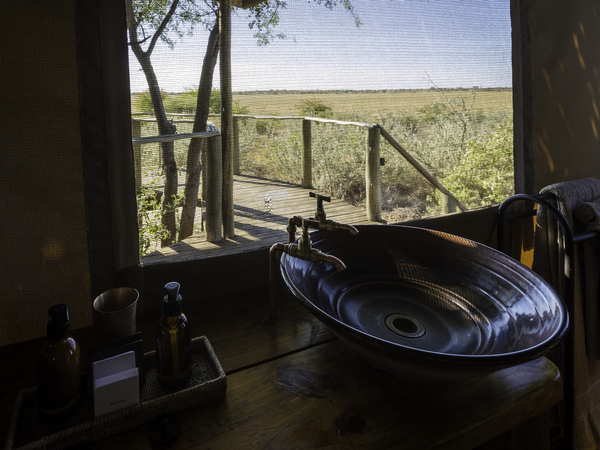 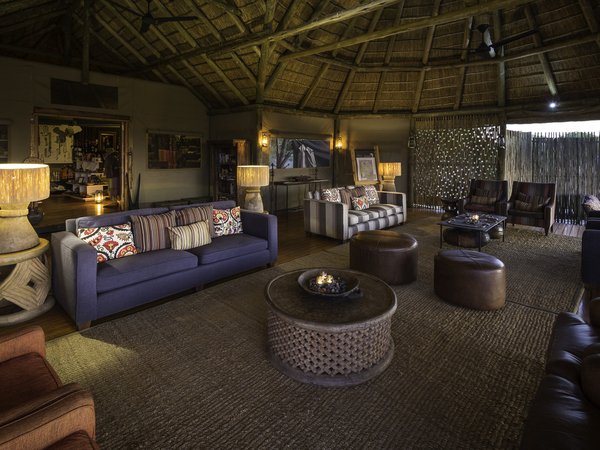 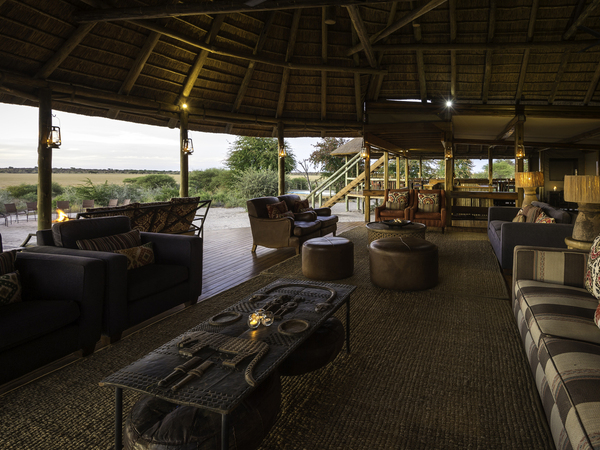 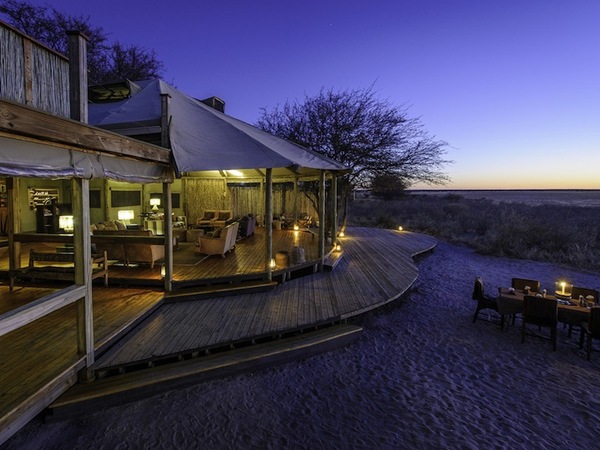 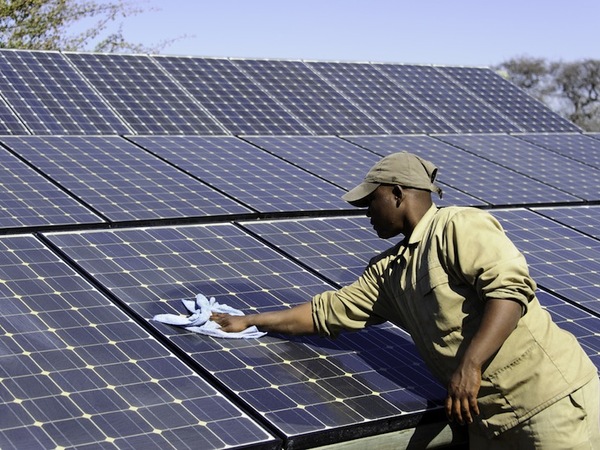 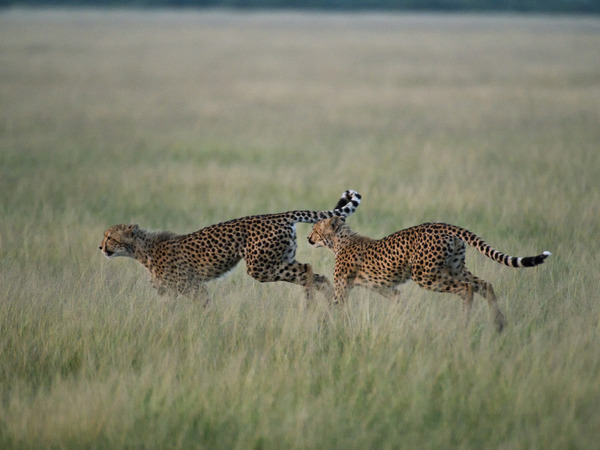 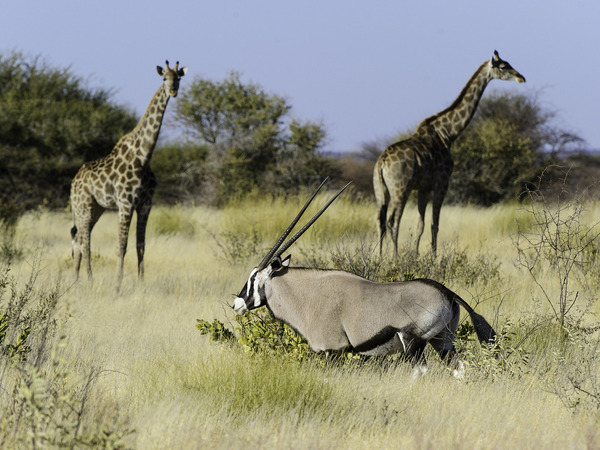 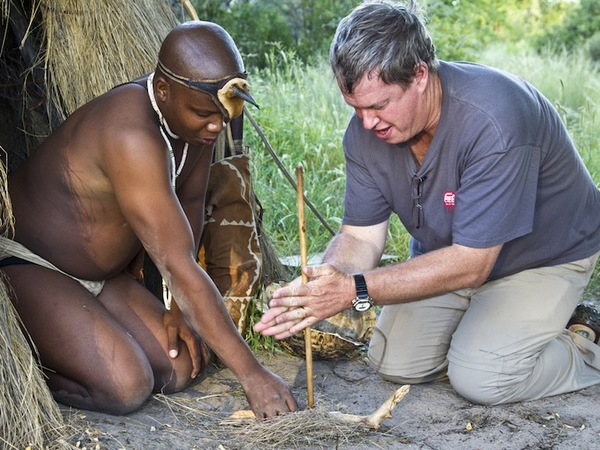 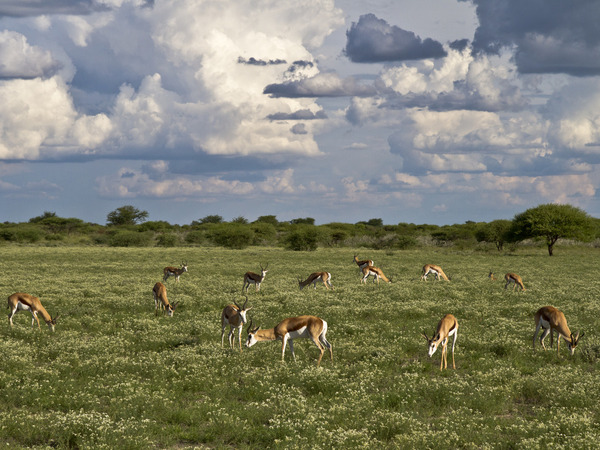 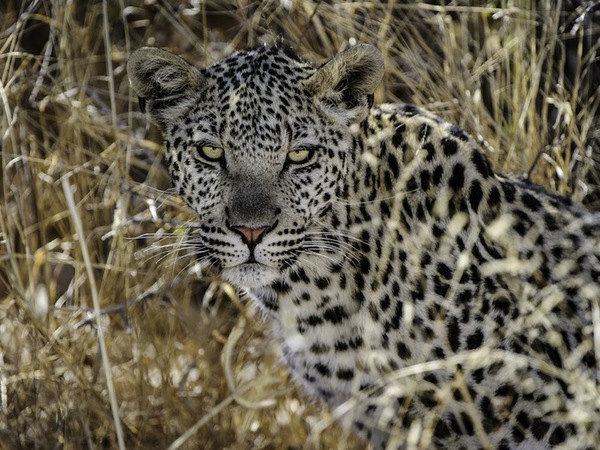 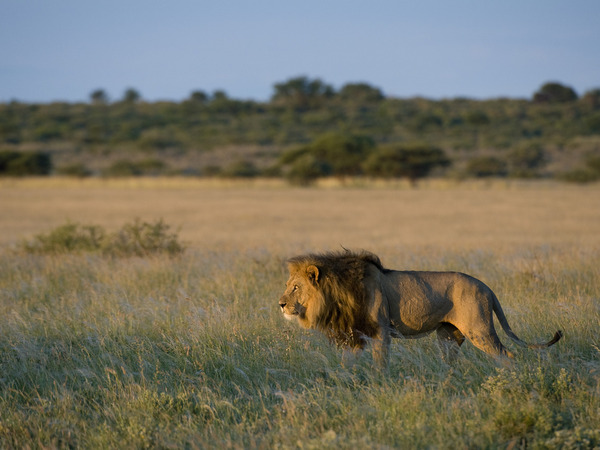