Every year the endless plains of the Serengeti host the migrations of vast herds of wildebeest and zebras. As these animals seek out new grass that grows in new places following seasonal rains, lions and cheetahs stalk behind them, waiting to pick off weak members of the herds. The Great Migration offers breathtaking wildlife photography opportunities unlike anything else on the planet. 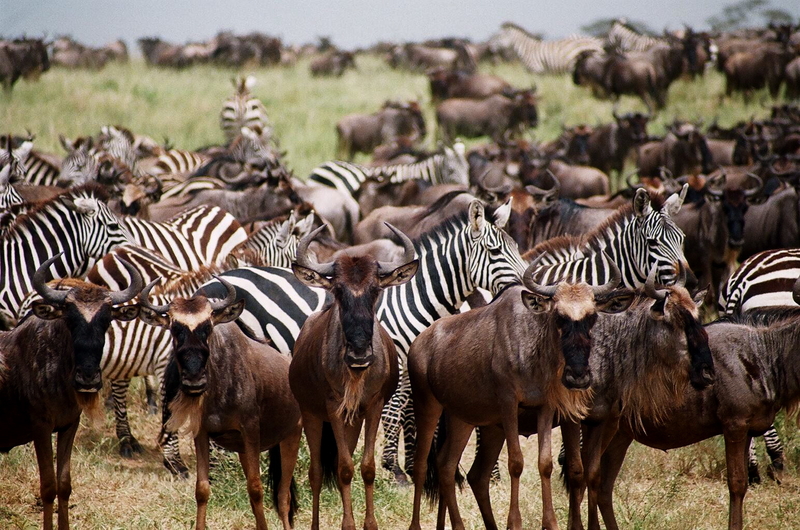 The Great Migration unfolds across the Serengeti in a place with a wealth of different species. In addition to the great herds of wildebeest and zebra and the feline predators that follow them, travelers often see birds such as kingfishers, lilac-breasted rollers, fish eagles and crowned cranes in the tall grasses and brush. Giraffes munch on the acacia trees. Herds of elephants wander by and water buffalo look on from rivers and lakes. You might even be lucky enough to spot a rare endangered african wild dog.

A bull elephant throws dust and sand over his back to protect himself from insects and sunburn. (Image credit David Luck)

Most thrilling of all, at the peak of the migration season in January and February, travelers may see baby elephants, lion and cheetah cubs, and witness more than a million wildebeest drop their young on the plains. Avoiding the crowded, central areas and large safari camps of Serengeti National Park increases the likelihood of witnessing remarkable wildlife interactions. Some of the natural encounters travelers see are brutal as predators take down young or weak members of the great herds, but these moments are an essential part of the spectacle that is the Great Migration.

A coalition of cheetahs drags down a lone wildebeest isolated from its herd on the Serengeti. (image copyright Melissa Scott)

Look for trips guided by experienced photographers so that you can get the best pictures and learn tricks for great safari photos. Check out the spectacular photos below to get a taste of the gorgeous landscapes and magnificent animals you could see and capture with your camera on a wildlife photo safari to Tanzania.

An african fish eagle circles through the clear blue skies over Tanzania searching for prey in the grasses below. (Image credit David Luck)

A lioness reprimands her young cub as the pride relaxes in the tall grass of the Serengeti. (Image credit Melissa Scott)

A mud-covered group of water buffalo look up from eating and the youngest member licks its nose. Water buffalo herds are segregated by gender. (Image credit Melissa Scott)

A dazzle of zebras heads toward a clump of tall trees in Serengeti National Park. (Image credit Suzanna Spencer)

Photographers may capture acacia trees silhouetted against a Serengeti sunrise as they rise early to see wildlife at their most active. (Image credit Melissa Scott)

A pied kingfisher perches on a branch on the Serengeti. (Image credit Justin R. Gibson)

Wildebeest graze on new grass in the dusty air of the Serengeti on their Great Migration. (Image credit Patrick Endres) 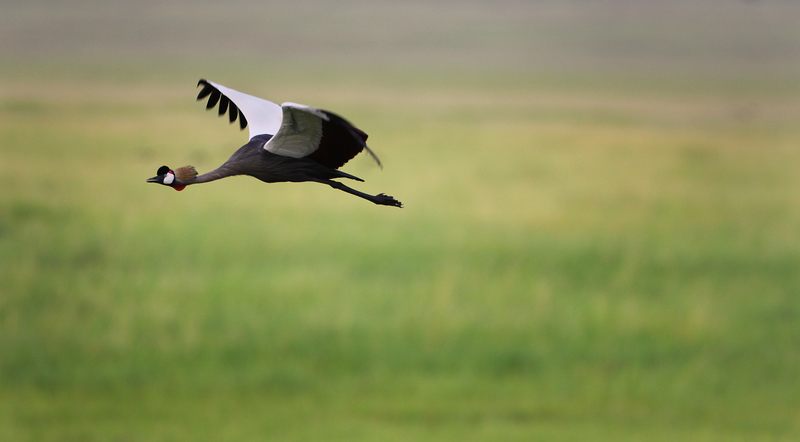 A grey crowned crane flies close to the ground, coming in to land in the grass. (Image credit Eric Rock)

What safari animals would you most like to see and photograph? Let us know in the comments!

This is a guest post by Julie Waggoner, Digital Marketing Consultant at Natural Habitat Adventures.