The Serengeti Migration Is Off to a Record Early Start 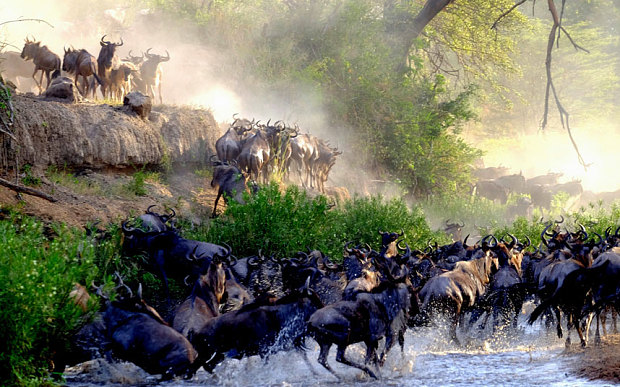 The Great Serengeti Migration may be off to a record early start, according to an an article published on Telegraph.co.uk on March 20th.  Last week, hundreds of thousands of wildebeest started pouring into areas of the central Seregenti in Tanzania three months earlier than usual,  “astounding safari experts” and delighting suprised visitors.

“It’s one of the earliest sightings on record,” said Bradley Murray, general manager of Singita Faru Faru Lodge, which lies on the Grumeti River in the central Serengeti.  “They started passing through the reserve unexpectedly on May 1st last year and we thought that was a big deal – but this is incredible.”

Unseasonably dry conditions in the southern Serengeti have pushed the animals northward in search of greener pastures earlier than normal. About 1.5 million wildebeest and 200,000 zebras embark upon the 1,200 mile journey each year. Thousands of females give birth during the migration while dodging a fierce retinue of predators, resulting in what is widely considered to be the world’s most dramatic and impressive wildlife spectacle.