This is a guest post by Julie Waggoner, Marketing Intern at Natural Habitat Adventures.

No safari would be complete without a sighting of giraffes on the savanna, and there is more to these elegant creatures than you may realize. Here are a few surprising facts about giraffes to help you know them a little better on your next safari (or your next visit to the zoo).

A group of giraffes scan their surroundings for threats and particularly delicious acacia leaves in Botswana. Image copyright Eric Rock.

1. They have a strong odor, which is part of their defense system.

The giraffe’s fur works as a chemical defense. It is full of antibiotics and smelly chemicals that repel parasites, giving the giraffe a strong odor. Old males are sometimes nicknamed “stink bulls.”

2. They can stay awake much longer than we can.

Giraffes have one of the shortest sleep requirements of any mammal. They need only between 10 minutes and two hours of sleep in a 24-hour period, averaging 1.9 hours per day. Giraffes’ sleep needs are pretty much the opposite of the average house cat. 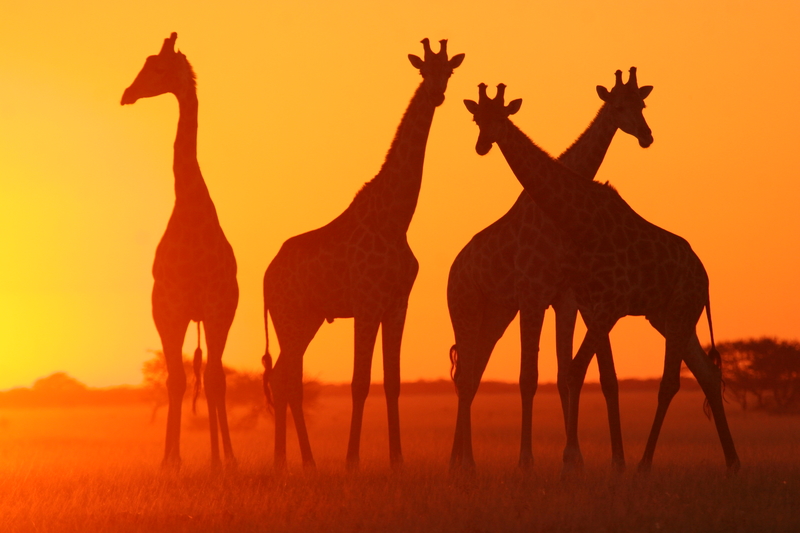 A group of giraffes silhouetted against a Kalahari Delta sunset in Botswana. Image copyright Thuto Moutloatse.

3. Their horns indicate whether they are female or male.

The small horns on top of giraffes’ heads are made of ossified cartilage. They are a means of identifying the sex of giraffes: females have tufts of hair on top, whereas males’ horns tend to be bald.

4. Their long necks have something in common with ours.

Like humans, giraffes have seven vertebrae in their elongated necks. Giraffes’ necks may weigh up to 600 pounds and account for half of these creatures’ impressive 14 to 19-foot height. 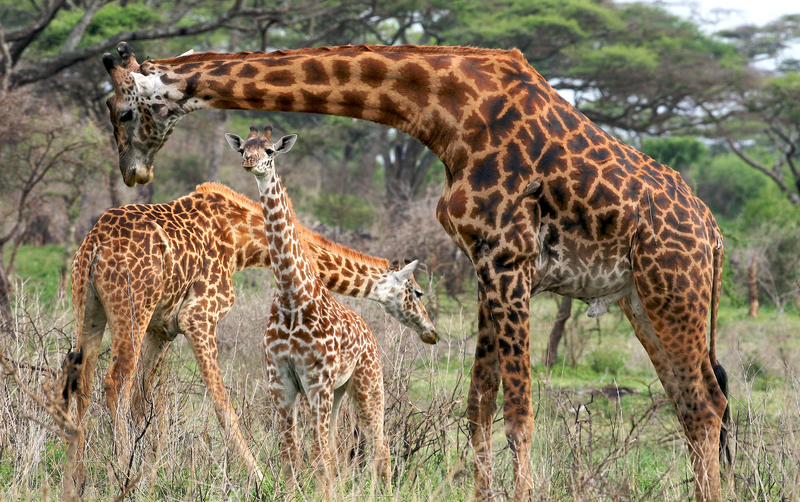 A family of giraffes munch on acacia twigs and socialize in Tanzania. Image copyright Stanley Doctor.

5. Baby giraffes have a bumpy arrival in the world.

The mother giraffe gives birth standing up, and the embryonic sack usually bursts when the baby falls headfirst to the ground from more than five feet in the air. Newborn giraffes are about six feet tall and develop quickly. Within half an hour of birth they can stand and they can run a mere 10 hours after birth.

6. They’re tougher than they look.

A giraffe’s legs may look long and delicate, but a single well-placed kick from a giraffe can shatter a lion’s skull or break its spine. Lions are the only predators that pose a serious threat to an adult giraffe. Males sometimes fight each other for territory, using their necks and horns as weapons, as can be seen in this rare video of a giraffe fight.

Excited to see giraffes for yourself? These giants can be seen in many safari countries. One of the best places to see them and interact up close is at Giraffe Manor in Nairobi, Kenya.