Saving Rhinos with Music in Namibia 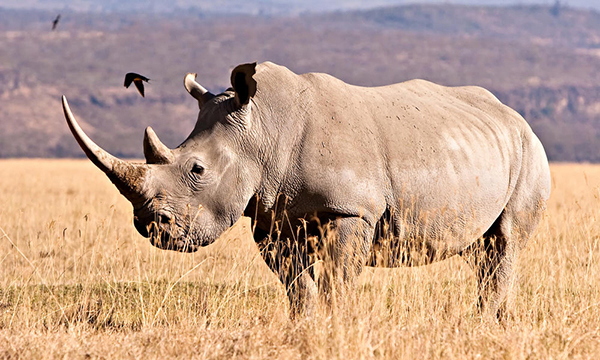 Rhino poaching has reached epidemic proportions across the African continent. Even though the international trade in rhino horn has been banned since 1977, rising consumer demand has continued to fuel criminal syndicates that brutally kill rhinos for their horns. If the current rates of poaching and habitat destruction continue unabated, Africa’s black and white rhino species face the threat of extinction within our lifetime.

The southern African nation of Namibia is home to both critically endangered black rhinos and near-threatened white rhinos.  Since gaining their independence in 1990, the Namibian people have made strong conservation commitments to help preserve wild rhinos and the wild habitats that the animals depend on.

A Namibian-registered charity known as Save the Rhino Trust has spent more than 30 years working to monitor and protect the desert-adapted black rhinos of northwest Namibia, in partnership with the Namibian government, Ministry of Environment and Tourism, private and communal conservancies, other NGOs, and the ecotourism industry. Today, Save the Rhino Trust and everyday Namibians are standing together to stabilize and increase Africa’s vulnerable rhino populations.

Tired of the senseless slaughter of Africa’s rhinos, a popular Namibian artist known as Elemotho recently contacted Save the Rhino Trust to find out how he could help end poachers’ assault on rhinos. Save the Rhino Trust responded that Elemotho could do what he does best—make music that inspires people.

So Elemotho collaborated with his band (Tayo, Kali, Piu and Samuel) and other Namibian artists like Oteya, Esme “Songbird,” and Meta to create an original song called “Stand Together,” which creatively merges the powerful forces of music and conservation into an emotional, strong and upbeat song dedicated to rhinos.

Stand Together showcases Elemotho’s heartfelt voice delivering poignant English lyrics, along with some lyrics sung by other Namibian musicians in indigenous languages to help reach native populations in and around wild rhino ranges. This spectacular song shines as a true labor of love that demonstrates Namibia’s commitment to protecting their wildlife. 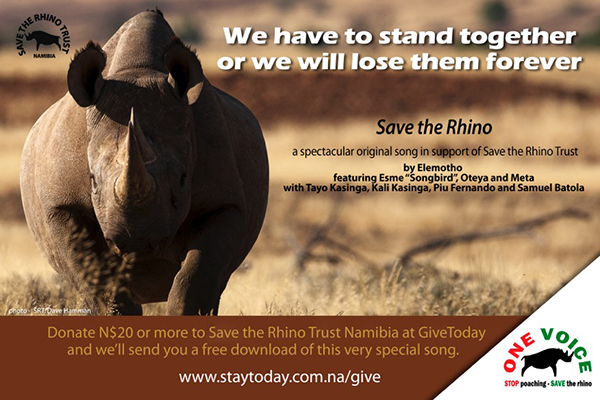 “Stand Together” has already become the anthem of Save the Rhino Trust’s efforts to protect this iconic species from extinction, increasing local peoples’ awareness of the plight of the rhinos and encouraging them to work together to stop poaching. Now, it’s time to bring these powerful messages to an international audience.

We invite you to stand with us to Save the Rhino—listen to a preview of “Stand Together” using the audio player below and then donate U.S. $2 or more to Save the Rhino Trust to receive a link to download this conservation song.

Making a financial contribution to Save the Rhino Trust is a meaningful action that empowers this pioneering organization to better address the ongoing poaching challenge that threatens critically endangered black rhinos in Namibia. In exchange for your generous donation, you’ll get a complimentary download of “Stand Together” to share with your family and friends.

Together, we can ensure that the sun doesn’t set on the rhinos of Namibia.

Donate, download and begin spreading the musical message of “Stand Together” today!