Photo of the Day: A Martial Eagle in Action 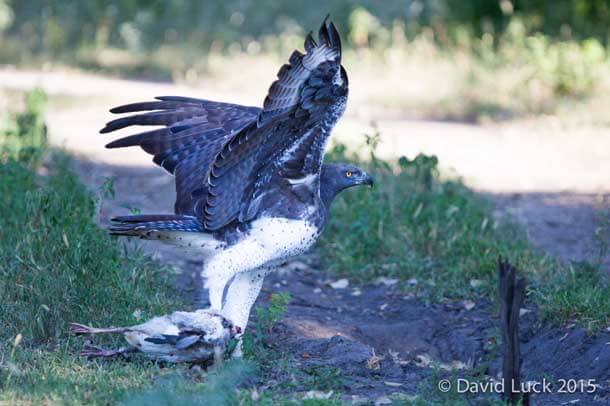 This striking image of a martial eagle preparing to devour an Egyptian goose was taken by safari guide Dave Luck near Botswana’s Mombo Camp.

Luck writes, “I was careful not to disturb this incredible raptor and we managed to get to about 30 meters from it. Initially it was in the sun so it dragged the goose to the shade of a nearby tree.”

With wing spans sometimes reaching eight and a half feet, the martial eagle is the largest eagle in Africa and is widely regarded as one of the world’s most powerful avian predators. Its diet includes a wide variety of birds, lizards, snakes and small mammals, including baboons and other monkeys, and sometimes even young warthogs and impalas.

“I was fascinated with how meticulous the eagle was in plucking its prey. Great care was taken in removing just about every feather possible,” says Luck of the encounter. “With it being so relaxed we took some images and then observed it finally eating the goose.”