Photo of the Day: A Carmine Bee Eater Doing What It Does Best 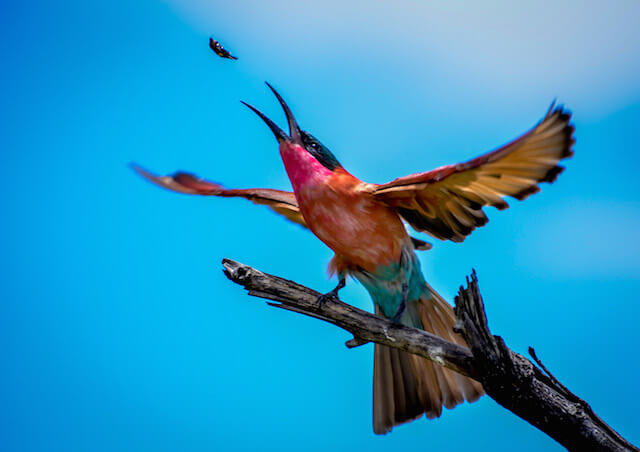 My friend Dr. Amanda Stronza recently took this fantastic image of a Carmine bee eater in action and was kind enough to share the story behind it with us:

“We found this bright, beautiful Carmine bee eater one early afternoon in January, in northern Namibia’s Bwabwatu National Park, near the border with Botswana. She and two other bee eaters were hunting from the same tree, sallying back and forth, and bringing in an astounding stream and variety of insects and spiders. The birds were remarkably at ease with our presence, and even the shutter sounds of my camera seemed to inspire rather than stifle their acrobatics. This photo is a bit deceiving. Though it might look like the bee eater is reaching out to catch the insect careening towards her, in fact, the opposite is happening! The bee eater had already caught the insect and landed on the branch to eat, when suddenly her prey escaped. At this moment, she’s reaching out to grab it back!”

Dr. Stronza is the research director for Ecoexist, a non-profit working to reduce conflict between humans and elephants in Botswana’s Okavango Delta.