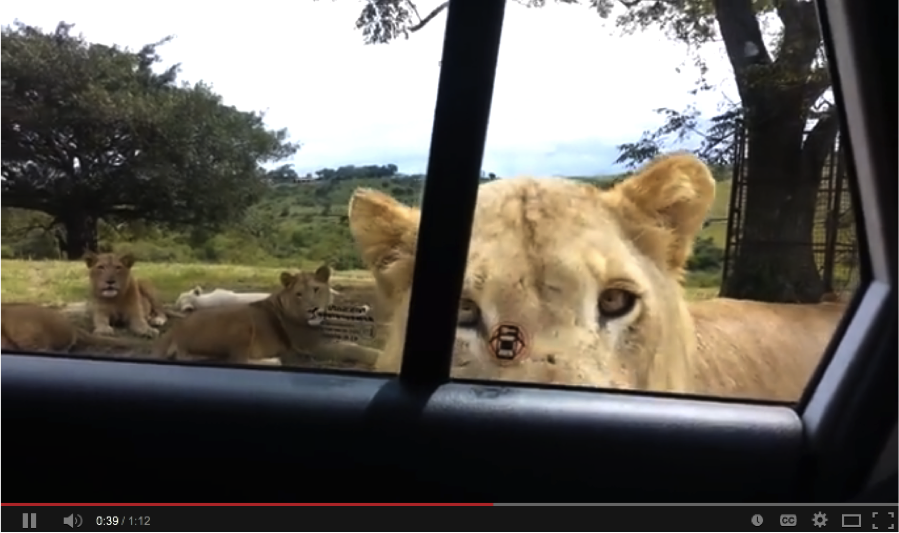 The view from the car moments before the unexpected incident.

You may have already seen this video of a lion in South Africa casually opening a car door, much to the surprise and horror of the family inside. It has racked up millions of Youtube views in the last couple of weeks. But if you haven’t seen it, it’s worth a minute and thirteen seconds of your time.

The family was on a self-guided safari in an unidentified wildlife park when the startling event occurred. At first it’s all “oohs” and “ahs” as they enjoy the impressive sight of six lions lounging near the roadside.

But the mood quickly changes when one of the lions gets up and approaches the car.

The feline peeks in and then suddenly and unexpectedly opens the back door with her teeth as the startled passengers erupt in screams.

“You’re supposed to lock the door!”

“Oh my gosh! I didn’t know they could do that.”

In fairness to the family, lions don’t usually do that and they actually played it pretty cool, given the circumstances.

It seems like the lion was probably more curious than anything. Guided safaris usually take place in open-topped vehicles, so there is nothing separating passengers and wildlife, lions included, aside from the sides and doors of the vehicle. As safari guides generally explain it, as long as the passengers stay seated, don’t move too much, or make a lot of noise, lions and other wildlife don’t seem to differentiate between the vehicle and its passengers and everyone stays safe.

So did the lion realize there were people in the car? And was she trying to get to them? Only the lion really knows, but we’re going to ask some of our favorite safari guides and get back to you with their thoughts on the incident. Stay tuned!