In the wildlife drama that is a Botswana safari, this looked like a virtual demolition zone. We had just stepped out of our kayaks, scouting for an optimal place to camp. Looking around, we realized that the island had been completely trampled. There were heaps of broken tree debris, plants ripped up by the roots, grass chewed up and large fresh elephant turds all over. We had landed on a messy elephant Grand Central Station and some large trains had just left in a hurry!

Our small group of eight paddlers was doing the first exploratory commercial kayaking trip down the upper Okavango River in Botswana. We had chosen to paddle the Okavango River at the beginning of the dry season — at the time when there was the most water in the river. It would make boating easier and the water would be colder, thus keeping those pesky crocodiles less aggressive. Most importantly, it would be during the time where an abundance of wildlife from all neighboring areas congregate to feed, drink and mate.

The flip side of exploring in late spring was that the elephants would seek higher grounds out of the river (just like us) to feed. Our campsite was on one of these larger islands. The previous day on a similar islet, we had seen a large elephant stand up on his hind legs, push his trunk against the upper part of an ivory palm tree and, with amazing power and agility, shake all the fruits off the tree. A few days earlier, during a hiking safari outing, we had encountered a large bull elephant in the dense bush, flaring his large ears and charging us — ultimately scaring us off. 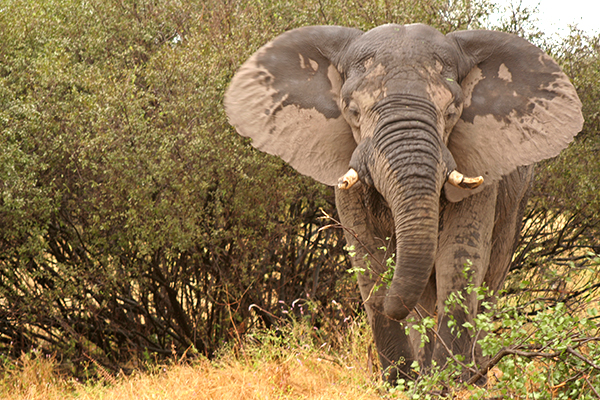 The African bush elephant (Loxodonta africana) that had torn through our campsite is the larger of the two species of African elephant. Biologists estimate that this species typically ingests an average of 500 pounds of vegetable matter daily, and much of this coarse food passes through their system without being thoroughly digested. That, combined with the long distances it can cover daily in search of more food, contributes notably to the dispersion of many plant seeds that germinate in the middle of a nutrient-filled feces mound.

Under normal conditions, elephants eat mostly grass, tree leaves, flowers, wild fruits, twigs, shrubs, bamboo, and bananas. Their main food is grass when it’s available, along with some leaves. But if the weather turns dry and grass dies back, elephants will eat almost any kind of vegetation they can find. They will knock down trees to eat their foliage. They will even resort to eating bark and the woody parts of plants. Elephants will also use their tusks to dig for roots and water, making additional drinking water available not only to themselves, but also for other types of animals.

There is plenty of space for these magnificent pachyderms to roam. The sheer scale and magnificence of Botswana’s Okavango Delta helped it secure a position as one of the Seven Natural Wonders of Africa. For some wildlife enthusiasts, there is no wilder place on Earth: this is the Africa of 100,000 years ago! The Okavango Delta is a huge inland delta formed where the Okavango River drains from its source in Angola rain forest and finally reaches the mighty Kalahari Desert. All this water reaching the delta ultimately evaporates and transpires; it does not flow into any sea or ocean. This annual flooding of the Okavango Delta takes place in the driest part of the year when food and water are scarce; so many thousands of elephants pass through the region, following ancient migration routes. 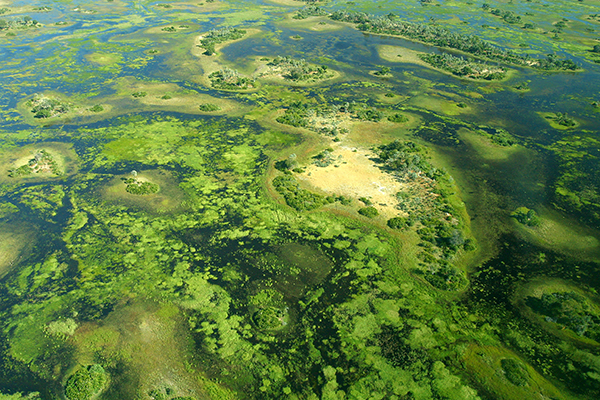 Botswana is home to one sixth of the world’s elephant population and Okavango parks such as Chobe, just north of where we were, have some of the highest density of elephants on the planet during the dry season. Scientists have estimated that the Okavango Delta is home to around half of the continent’s elephants. Indeed, a recent survey by the Great Elephant Census counted more than 120,000 elephants in northern Botswana alone! And the numbers are growing. Some researchers also believe that more elephants are moving into the Okavango Delta from neighboring war-torn countries like Angola and the Congo. These elephants are psychologically-scarred immigrants fleeing poaching hotspots.

There have been a few incidents of poaching in Botswana, but the government decided to set up a military task force in the fight against the scourge. Poachers were ruthlessly dealt with and the task force became a full-time anti-poaching unit. In the Okavango Delta, the populations of people and elephants are nearly equal — about 15,000 each. In a shared space of just over 8,000 square kilometers, people and elephants compete directly for access to water, food and land.

At certain times of the year, some elephants in the region move south and east from seasonal waters in the pans near Namibia to the waters of the Okavango Delta. Along the way, they pass through the villages and settlements of the panhandle, using distinct pathways remembered and followed by elephants for generations.

Some of these pathways have become restricted or even blocked where farmers have been allocated fields for planting that sit directly on top of these pathways. It is inevitable that elephants will use all the resources available to them to get food and water. This means elephants are at risk of being killed by farmers who are just trying to protect their crops. In the short term, the solution is to empower farmers with practical, affordable, and effective tools to deter crop-raiding and reduce conflicts with elephants. For instance, conservationists are collaborating with locals to introduce alternative crops that can be harvested before the elephants arrive.

Although the elephant population in the Okavango Delta is mostly healthy, there is a significant threat to elephants across other parts of Africa. Humans are the elephant’s major predator, with poachers killing elephants for their meat, skin, bones and tusks. Trophy hunting also increased in the 19th and 20th centuries, when tourism and plantations increasingly attracted sport hunters. The population of African bush elephants across the African continent was halved during the 1980s. At that time, scientists estimated that, if no protective measures were taken, Africa’s wild elephants would be extinct by 1995. In 1989, hunting of the African bush elephant for ivory trading was forbidden after the continent’s elephant population fell from several million at the beginning of the 20th century to fewer than 700,000. The protection the elephant now receives has been partially successful, but despite increasingly severe penalties imposed by governments against illegal hunting, poaching is still common.

The free and healthy roaming elephant herds of Botswana are an optimistic glimpse of the Africa that could still be saved for generations to come. So if you have a yearning to experience this Elephantine Paradise of Okavango, come join us on one of Natural Habitat’s most sought after wild destinations on the planet.

Although we never repeated the Okavango River paddling trip (the crocs were simply too pesky!), we have lots of other great adventures to offer and we think we do it the best way. Botswana safaris are best experienced in small numbers, and we limit our group tours to approximately seven guests, accompanied by two naturalist Expedition Leaders. This exceptionally small group size ensures the most remote and personalized Botswana safari experience possible, allowing for truly intimate wildlife encounters.

Our Botswana safari tours have been meticulously designed in conjunction with our conservation travel partner, World Wildlife Fund, to provide a secluded and superlative experience with Botswana’s prolific wildlife — far from tourist crowds.

Finally, rather than staying in Botswana’s more heavily visited national parks, we retreat to private reserves located adjacent to the parks, where we enjoy an isolated setting and exclusive activities that are off-limits to most park visitors. This includes nighttime game drives in search of nocturnal species, as well as guided walking excursions, allowing a rare chance to explore the African bush on foot.

We welcome you to join us for a Botswana safari to experience elephant Grand Central Station for yourself! 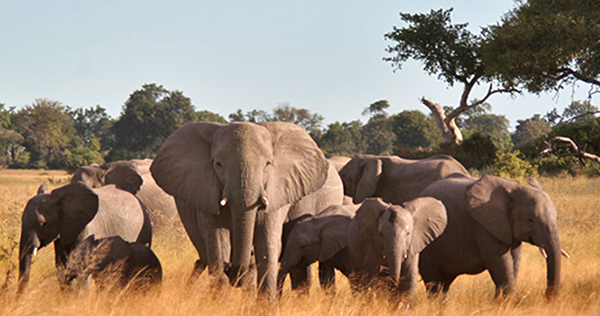