Cheetah Vs. Hyenas in the Sabi Sabi Private Game Preserve

What happens when a cheetah crosses paths with two hyenas? Thanks to Steve Volkwyn, a safari guide at Sabi Sabi Bush Lodge, we know the answer to this question. He recently captured some amazing images and video of an encounter between a male cheetah and two mischievous spotted hyenas in the Sabi Sabi Private Game Preserve near Kruger National Park.

Steve and his tracker initially spotted the cheetah high in a tree. He soon jumped to the ground and perched himself atop a termite mound where he vigilantly scanned the area for danger. Soon it was clear that something had caught his eye in the distance. Steve and the tracker assumed it was a herd of impala along the tree line. 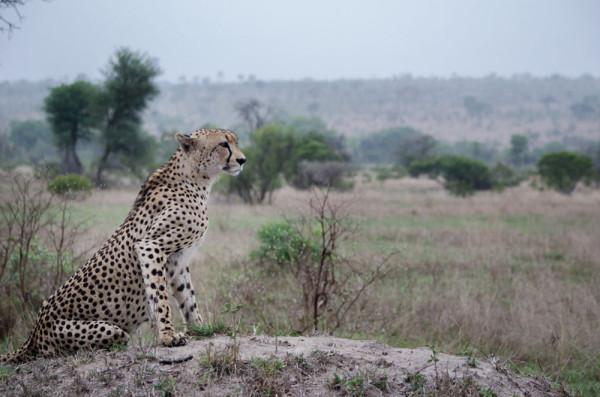 The cheetah scans the horizon from atop a termite mound. © Steve Volkwyn.

The cheetah stood and walked through the grass to a baobab tree. Surprisingly he managed to pull himself high into the tree, gaining an excellent vantage point to look for potential prey and predators. After a few minutes, it seems he spotted something in the distance. His body stiffened and he began to snarl and hiss. Soon, two spotted hyenas came into view. They had their noses to the ground, obviously trying to follow the scent of the cheetah. According to Steve, hyenas often follow after cheetahs and leopards in the hopes that they can steal a quick meal from them. 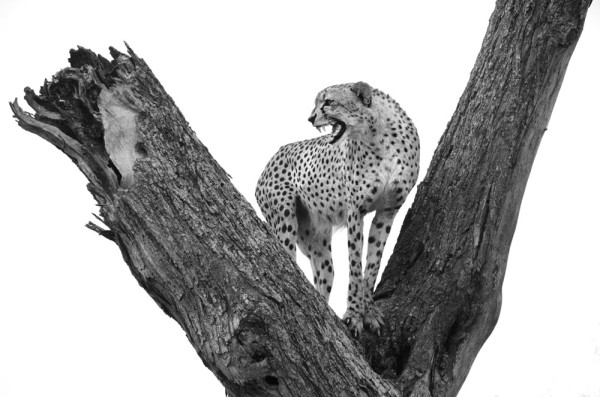 The cheetah leapt into a baobab tree to gain a better vantage point. © Steve Volkwyn.

Steve thought that the cheetah would likely make a run for it. He didn’t. He jumped out of the tree and stood his ground. The standoff lasted about 10 minutes. The cheetah stood frozen, attempting to make himself look larger, while the hyenas tried to play it cool. 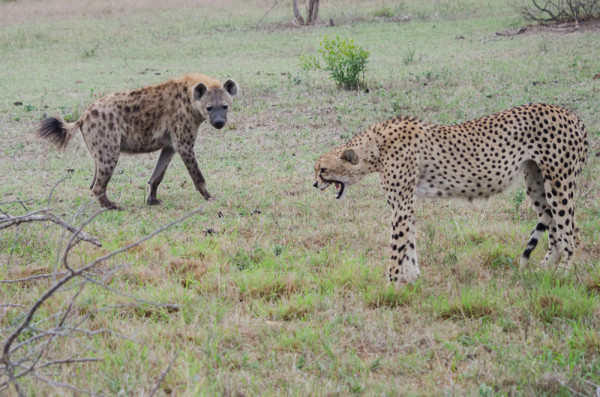 Eventually, the cheetah had had enough and made his move. It happened pretty quickly, but was impressive nonetheless. See for yourself in Steve’s video below:

Excerpted and summarized from “Hyena vs Cheetah” on Sabi Sabi’s blog.