Can South Africa Save Its Rhinos by Selling Them? 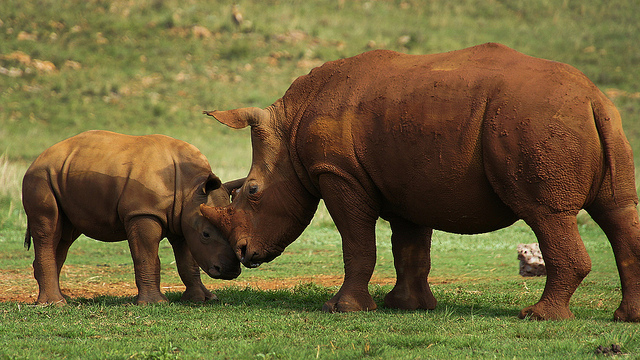 Rhino by Steve Evans is licensed by CC BY-NC 2.0.

Drastic times calls for drastic measures, as the old adage goes. And these are certainly drastic times for South Africa’s rhinos. The country, which is home to 80% of the world’s remaining rhinos, has been in the grips of a raging poaching epidemic since 2007. Last year alone, 1,155 of the country’s rhinos were killed for their horns to meet the demand of Asia’s growing illegal wildlife trade. That’s almost 5% of the country’s total estimated rhino population of 25,000. If this trend continues, all of South Africa’s rhinos could be gone in the next two decades.

Earlier this week South African National Parks (SANParks) announced a drastic plan in response to the crisis: to sell off as many as 200 of its rhinos to private buyers. The hope, it seems, is that the sale will allow the animals be moved to safer areas within the country.

Kruger National Park, which is home to most of the country’s rhinos, is easy to access and has been hardest hit. Of the 631 rhinos that were killed between January and August, 408 were killed in the park. The park is about the size of Israel and shares a porous border with Mozambique, making rhinos there easy targets for organized international criminal syndicates, which often employ high-tech measures, including helicopters, high-powered rifles and night vision scopes, to bag their quarry and escape undetected.

Will selling off the rhinos help save them? It does seem like getting some rhinos out of Kruger is probably a good idea. In fact, it’s already happening. This year, Rhinos Without Borders will move as many as 100 rhinos (both black and white) from high density populations in South Africa to reserves in Botswana, a country with lower rhino densities and stringent anti-poaching measures.

Still, the plan seems to raise some important and difficult questions. If Africa’s richest country can’t protect its rhinos, is it reasonable to believe that private owners, no matter how wealthy, will have the necessary resources to do the job? And rather than sell the animals to private buyers, why not relocate them to harder to access and better protected national parks or reserves in South Africa or Botswana?

Only time will tell whether this new plan will help save South Africa’s dwindling rhino population. Let’s hope that it does.