Black Rhinos Survive in the Deserts of Namibia 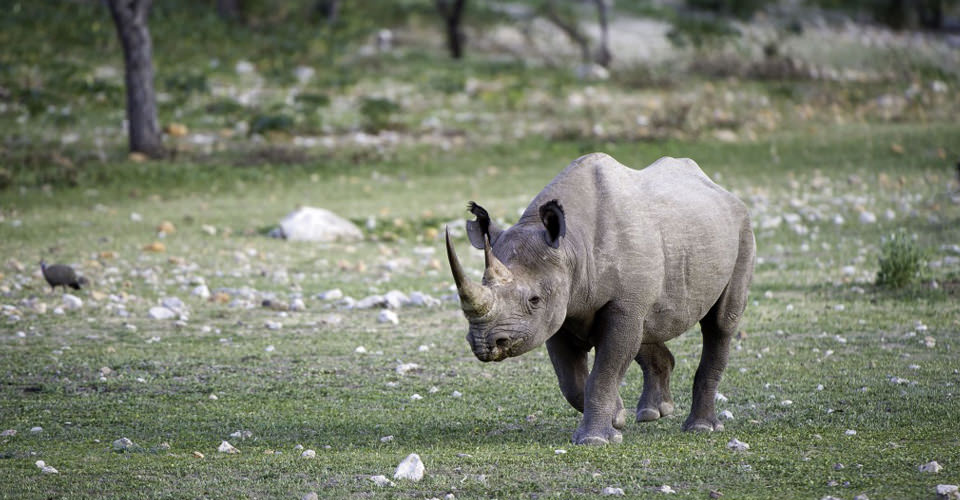 Due largely to the high value of powdered rhino horns in traditional Chinese medicine, poachers killed 98 percent of the rhinos in Africa between 1960 and 1995. Even now, rhino populations continue to decline rapidly around the world.

In 2011, both a subspecies of the Javan rhino in Vietnam and the western black rhino in Africa were officially declared extinct by the International Union for Conservation of Nature (IUCN). If current trends continue, more rhino extinctions will likely occur in the near future.

Some of the world’s last remaining rhinoceros still roam free in the barren wilderness of the Namib Desert in Namibia. Living in one of the harshest environments on the planet, these black rhinos are some of the rarest and most fascinating of all rhino species.

The Great Namibia Wildlife Safari offers travelers a unique opportunity to track this desert rhinoceros on foot from the exclusive Desert Rhino Camp in the remote wilderness of the Palwag Concession in the Namib Desert. Safari-goers search for black rhinos and other uniquely adapted desert wildlife amidst Namibia’s striking geography, in the company of conservation experts and researchers.

The World Wildlife Fund is taking action to help protect the remaining rhinos in Africa, and increased global awareness of the threat posed by rhino poaching has the ability to help save this endangered animal from extinction.

Thanks to the efforts of dedicated conservationists during the past two decades, the number of black rhinos in Africa has doubled from the 1995 low point of 2,480 individuals. Today, the rhinoceros has become a beacon of hope for all of Africa’s delicate wildlife.

This post is by The Safarist guest contributor Derek Ward, a marketing professional and avid traveler living in New York City.